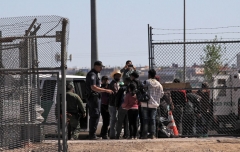 “The United States is on track to have 2 million migrants cross our border by the end of September. That’s about twice the population of Delaware, President Biden’s home state,” McCarthy said, adding that “172,000 were apprehended during March, the most in a single month in more than 20 years.”

McCarthy said the U.S. currently has 20,000 unaccompanied minors in custody - “the highest number since the statistic has been tracked.”

“Just in the past several months, two suspected terrorists were apprehended attempting to cross into our country. About a month ago, when I was at the border speaking to the Border Patrol agents, they told me about those that they have apprehended on the terrorist watch list,” the minority leader said.

“When I came back and presented it in the press conference, we had Democrats, colleagues of mine, actually that called me a liar, challenged me because they believed they had the same security clearance as I did for the knowledge of what they would know,” McCarthy said.

“They were proven wrong, never once apologized, but worse, never did anything to stop it, and since that time that they have been notified, we’ve now found that two more individuals from the terrorist watch list from Yemen had been apprehended, and they weren’t together,” he said.

“They were on separate days, and the question rises - why were they coming? Who brought them here? Who were they going to meet in America? And what did they have planned? I think these would be the questions of the vice president as well, but she’s yet to go to the border,” the minority leader said.

“The amount of fentanyl seized this year increased by an alarming rate, of 233 percent from the same period last year. When I was at Monument three in El Paso, looking just down the fencing, the agents told us that they’ve never seen so much fentanyl as they have during the last month,” McCarthy said.

He noted that fentanyl is “50 to 100 times more potent than morphine, and if altered, becomes even deadlier.”

“We all know last year that 90,000 Americans died from drug overdose. How many more will die based upon what has happened on our border?” the House Republican leader asked.

“Now with all these red flags, with all these problems, with everything that’s going on along this border, even those leaders of other countries - from the president of Mexico and others declaring that President Biden has created much of this, Speaker Pelosi just last week claimed that the United States is on a good path at the border,” McCarthy said.

“The question I ask the speaker - if we’re breaking all records, more fentanyl, terrorists, and more people illegally entering than we’ve seen in more than 20 years, if that’s a good path, what’s a bad path look like?” he said.

Vice President Harris, who President Biden appointed to oversee the border, has yet to actually travel the border and has no plans to do so,” McCarthy noted.

Harris announced Wednesday that she will visit Mexico and Guatemala, but has no plans to visit the border.

“The president has asked [DHS] Secretary [Alejandro] Mayorkas to address what is going on at the border, and he has been working very hard at that and is showing some progress,” she told reporters ahead of a virtual roundtable she was hosting with experts on the Northern Triangle countries — El Salvador, Guatemala and Honduras.

“I have been asked to lead the issue of dealing with root causes in the Northern Triangle, similar to what then-Vice President [Joe Biden] did many years ago,” the vice president added.

“To my understanding, in the speaker’s press conference, she gave you no plans either as the date that she would travel to see the security of our nation, now being notified that yes, those on the terrorist watch list have been apprehended on our border and have been representing California that she does as well. That’s where they found two of them from Yemen,” McCarthy said regarding House Speaker Nancy Pelosi (D-Calif).

The minority leader said that there are “five easy things” the United States can do to deal with the border crisis: finish the wall, deploy technology to the border, fully reinstate the Remain in Mexico policy, maintain and “robustly implement” Title 42 authority, and require a negative COVID test before releasing migrants.”

McCarthy noted that the border wall construction is already paid for, and the government is paying contractors not to finish it.