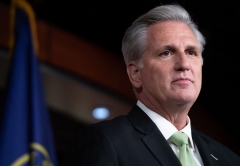 McCarthy said Thursday that the more that Biden talks, the more the American people will realize they don’t want the former vice president.

Biden would have to answer questions on his record of 47 years in the Senate, and he would have to explain why he flip-flops on certain issues, McCarthy said at a Capitol Hill press conference.

“President Trump won the debate. Could it be more productive? Actually my best advice is let Joe Biden talk. He is the Democratic Party. His ideas are far long gone. I think the more he talks, the more the American public will decide they don’t want Joe Biden. Isn’t there a reason why he puts a lid on almost most of his days?” the minority leader asked.

Every time Joe Biden - and maybe that’s why the campaign puts a lid on about every-- what’d they do in the two weeks prior, half of all the days were put a lid on by 10 AM. Joe Biden usually gets in trouble not by somebody asking a question, but just by his talking, so the more he talks, I think the stronger President Trump’s campaign is.

Then just run on the facts. Run on the record. Joe Biden has a long record - 47 years inside the Senate. Put that in perspective. When Joe Biden went to the Senate, there were people in the Senate who were born in the 1800s. Think of all the things Joe Biden won’t tell you. Why won’t he? Why won’t he name one law enforcement officer who would endorse him? Why wouldn’t he tell the American public more about his son when he was vice president? Why did you bring your son on a government airplane to China? Why did your son do business with China? What were you warned by those in the administration about what your son was doing?

Now with new information coming forward that a person very close to Putin - a wife - provided more than $3.5 million to your son, instead of just saying no, wouldn’t the information? Wouldn’t you want to come forward? Doesn’t the public have the right to know? More importantly, what are your policies? Because you say one thing during the primary. Now you’re saying something different. I’ve never seen anybody flip-flop more.

I’ve watched him look a woman in the eye and said, read my lips, to the point of what he would say, that he was going to end fossil fuel. Then he wants to try to say he’s for fracking after he said he was opposed to it. He says he’s for Green New Deal, but when it’s the debate, no, it’s not a Green New Deal, but it still does the same effect to the economy of harming it. He says he’s gonna raise taxes on the very first day.

He also said some very damaging things as well. He said poor people are just as smart as white people or white kids I think to be exact. That’s offensive. He also stood as vice president, went to a former KKK’s funeral, speaking very highly of him, along with Speaker Pelosi. So yes, I would let Joe Biden talk more, and if I was President Trump, just say what you have done - the strongest economy in the history of the nation.

You compare directly across from the failures of the Joe Biden - Obama administration. He reformed the VA, where hundreds of thousands were harmed and died because of the lack of ability even to get an appointment. He rebuilt the military. There is record after record, which President Trump has to run on, and I think it’s the strongest ability to win a re-election.