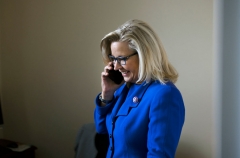 Congresswoman Liz Cheney on the phone in her office in the Cannon Bldg. after losing her GOP leadership role. (Photo by David Hume Kennerly/Center for Creative Photography/University of Arizona via Getty Images)

(CNSNews.com) – House Minority Leader Kevin McCarthy (R-Calif.) said he was shocked Wednesday that Rep. Liz Cheney (R-Wis.) was named by House Speaker Nancy Pelosi (D-Calif.) to the new select committee to investigate the Capitol riots because Republican congressmen usually get their committee assignments from the Republican leader instead of the Democratic leader.

A reporter asked if McCarthy believes that by Cheney accepting the assignment on the Jan. 6 committee from Pelosi that she’s left the Republicans.

“I was shocked she would accept something from Speaker Pelosi. It would seem to me since I didn't hear from her, maybe she's closer to her than us. I don't know,” McCarthy said.

When asked whether he regrets not supporting the idea of a bipartisan commission on the Jan. 6 attack now that he has even less oversight, the Republican leader said, “No. I regret the politics of Nancy Pelosi. For six months, she played politics with this. So what has transpired in those six months. In those six months in the senate, they had two committees, bipartisanly investigate this and give a report. The FBI has arrested almost 500 people.

“The architect of the Capitol has been given $10 million. Pelosi continues to make this nothing about politics. That’s why no one really takes this is serious based upon the direction of what she wants to go. If you have read the Senate report, you'd be very concerned,” McCarthy said.

“Did something happen in the summer to make the decision not to bring the National Guard here? Why were the riot gears locked in a bus that people couldn't get to? All that preparation ahead of time. Why was the intel not provided and moved further? Sergeant of arms never spoke to me prior to the meeting, prior to this sixth, during the sixth, after the sixth,” the minority leader said.

“There’s a lot of questions that raise, and you got the Senate that went and did the work, and we got a speaker that did nothing but play politics and try to drive it that way,” McCarthy said.

“If you were concerned about riots, why would you put the riot gear in a bus that was locked in a route down the way? If there was -- in the time of the riot took place, why was there not communication that had direction from leadership? Because leadership wasn't talking. There's so many failures along that way that happened the days before that allowed individuals to get into the building. That's what we want to make sure never, ever happens again,” he said.