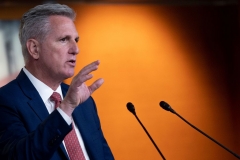 “I think it's really telling, and Kamala Harris, the vice president was in Virginia five days ago. She was correct when she said what happens in Virginia will determine a lot what happens in ‘22 and ‘24. History shows it. In 1993, they both went Republican and the House flipped in ‘94. In 2005, they both went Democrat and the House flipped to Democrats in 2006,” he told Fox News’ “America’s Newsroom.”

“In 2009, they both went - Virginia and New Jersey - Republican and they flipped to Republican in the House, same thing in 17 back to Democrats and now we see a path that's even larger with Biden winning Virginia by 10 points but New Jersey by 16. It wasn't just Virginia, New Jersey, Minneapolis, but also in Texas there was a special election state house that Biden won by 13 and with 73% Hispanic and it looks like the Republican won. What it tells you is policy matters,” McCarthy said.

“Who you listen to and what you fight for matters. They had this wake-up call before that. You mentioned the NBC poll - inflation, prices rising, the border, just maintaining it open, the wokeism, not listening to parents but listening to politicians. They have seen this coming. If they move forward with the reconciliation, they are deaf at what the American public is expecting of them,” he added.

McCarthy said that not only will he invite Youngkin to speak to his conference, he invested in Youngkin’s campaign.

“I invested in that as well because what they were doing is we were optimistic. They believed tomorrow would be better than today and they showed how they could do it. Glenn Youngkin talked about the DMV answering the phone. What were the Democrats talking about and hearing? They were running about the past, but more importantly, they were encouraging the attorney general to go after parents. They were ignoring the border and letting more people across,” the minority leader said.

“They were raising prices while they wanted to spend trillions of more dollars, which cost everybody more money and Glenn Youngkin what he literally said was, we'll lower the tax so you don't pay as much for your groceries, because Thanksgiving is going to cost you more than any other time. These are all based upon Biden’s policies and what the majority in the House and Senate have been doing,” McCarthy said.

“I think everybody wants to see an election about what's best going forward. I think the Republican party is united. You’ve got people supporting Trump. You’ve got people who didn't but the one thing they do like. They saw the difference in policies from the last 10 months to the policies today. They want America to be energy independent. They don't want to rely on OPEC,” he said.

“They want their prices to be lower. They want more people working. They don't want to let Putin have a pipeline and not America. They want to make sure their border is secure but we have an immigration system that works. They want to call the DMV where somebody will answer and say, how can I help you? They want to let their children go to school but they want the parents to have a say in the curriculum,” the GOP leader said.

McCarthy said that Republicans plan to write a parents’ bill of rights.

“You’ll find in the House we've been working on these task forces with policies coming out. We’re gonna write a parents’ bill of rights. Parents have a right in their children's education, and that's not a Republican or a Democrat. That's an American view. What did the Democrats say? They put the attorney general to go after those parents, even that father that got arrested because his child, his daughter got molested and raped inside a school, and they defended that and they continue to defend critical race theory,” he said.

“They have no policies about the future to make it better, and the only policies they were doing was harming the Americans, and that's why it became a uniting force. Ten points Biden won Virginia by, but he won New Jersey by 16. That was on nobody's radar,” the minority leader said.