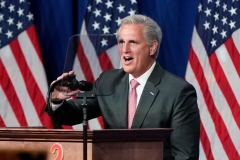 “Every Democrat that lost right now, lost to a woman, a minority, or a veteran Republican. This president has expanded the party larger than we ever have. We’ll have more women in the Republican House then in the history of America. We’ll have more minorities, and it was President Trump who expanded it,” McCarthy said on Fox News’s “The Ingraham Angle.”

“None of them. They’re all afraid, because they’ll be primaried and they’ll lose, but what’s very interesting here and shows more of the fraud. Not one Republican incumbent lost. We’ve already won eight seats, and we’re ahead in 10 more. How would President Trump lose in an atmosphere like that?” McCarthy said.

“How is it possible that someone claimed that Joe Biden would win, and not one Republican member of Congress lost re-election but almost 15 Democrats did? And you know what's happening? We're watching this go before our very eyes. Why is it in these major states that the big cities stopped counting ‘til all the rural votes come in, ‘til they know how many more they need?” he asked.

McCarthy said he heard that in “a little over 300 people” are being allowed to “re-vote” for a congressional seat in Iowa and now Republicans are behind.

“What’s interesting to me, I just spent four years listening to the Democrats make false claims about voter infusion. It's happening before our very eyes, and they are staying silent even down to the city council races, they allow people to observe the vote. They allow people inside,” McCarthy said.

He said Republicans will not back down and wait four more years to deal with alleged election fraud.

“We're going to fight this now, and we’re going to change it. For them to claim that Arizona won, at the end of the day, the president will carry Arizona. He will win Pennsylvania and that will be more than 270 electoral votes, and every American should stand up,” McCarthy said. He urged people to report what they see “that’s incorrect out there” to the Trump campaign.

“That's a mandate to me to change the rest of the country,” he said.

“They didn't defeat one Republican incumbent, and they lost 15, and President Trump won back this election, so everyone who’s listening, do not be quiet. Do not be silent about this. We cannot allow this to happen before our very eyes. You don't have to be a Republican. If you believe in every legal vote needs to count. We believe in the American process. Join together, and let's stop this,” McCarthy said.