Mayorkas: ‘The Cartels Spread Disinformation That Title 42 Does Not Apply to Haitians’ 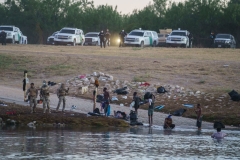 Haitians cross the Rio Grande towards the US under the watch of US Border Patrol, after Mexican police and National Institute of Migration officials blocked the Mexican side of the border at Parque Ecologico Braulio Fernandez in Ciudad Acuna, Coahuila state, Mexico on September 23, 2021. (Photo by PAUL RATJE/AFP via Getty Images)

(CNSNews.com) - DHS Secretary Alejandro Mayorkas said Sunday that the disinformation spread by cartels is a magnet for illegal immigrants coming to the United States, not the process of releasing those with asylum claims into the United States and allowing them to settle into whatever city they want to while they wait for those claims to be heard by an immigration judge.

One example of disinformation that the cartels spread was that Title 42 does not apply to Haitians, the secretary said.

“The cartels spread disinformation that Title 42 does not apply to the Haitians, and that prompts potentially Haitians to try to come to the United States and what do we do? U.S. Customs and border protection - phenomenal enforcement agency - goes on Creole language stations and communicates that Title 42 does apply to Haitians,” Mayorkas told “Fox News Sunday.”

The secretary said that DHS is “not letting people loose, and just letting them come in.”

“You have a process, but that whole process and eventually someone settles in whatever city they're looking to get to is a magnet for more illegal immigration or not?” Fox News host Bret Baier asked.

BAIER: The people who come in, and they get to whatever city they want to.

MAYORKAS: I’ll share with you Bret what is a magnet. What is a magnet is the misinformation that the cartels spread to individuals in different countries about what our laws are and what our policies are. That is a magnet, and that is why we counter that.

BAIER: Speaking of misinformation we learned that DHS’s disinformation governance board was coming out and we saw immediate concerns about free speech. You understand some of this pushback?

MAYORKAS:  There’s no question, Bret, that we could have done a better job in communicating what it does, and let me share with you what this department of homeland security does and has been doing for years throughout the past administration included. We address disinformation that presents a security threat to the homeland, disinformation from Russia, from China, from Iran, from the cartels.

I’ll give you a real-life example. The cartels spread disinformation that Title 42 does not apply to the Haitians, and that prompts potentially Haitians to try to come to the United States and what do we do? U.S. Customs and border protection - phenomenal enforcement agency - goes on Creole language stations and communicates that title 42 does apply to Haitians.

BAIER:  So it sounds a little bit like the global engagement center at the state department, so a little redundant, but here’s the problem–

This is a working– Bret, I really need to clarify. This is a working group that takes best practices to make sure that in addressing disinformation that presents a threat to the homeland that our work does not infringe on free speech, does not infringe on civil rights, civil liberties, It's not about speech. It's about the connectivity to violence. That is what we need to address.

An individual has the free-speech right to spew anti-Semetic rhetoric. What they don't have the right to do is take hostages in a synagogue, and that’s where we get involved.

BAIER: So the president’s pick to lead this is Nina Jankowicz. She’s taking heat for tweets and comments about major news stories - the Hunter Biden laptop, others. The laptop story obviously was blocked from social media outlets, because it was called Russian propaganda until it wasn’t, so do you really think that Jankowicz is anywhere near objective enough for this particular job?

MAYORKAS: Yes I do, and by the way, highly regarded a subject matter expert, and I don't question her objectivity. There are people in the department who have a diverse range of views and they’re incredibly dedicated to mission. We’re not the opinion police. She has testified before Congress a number of times. She’s recognized as a tremendous authority and we’re very fortunate to have her.

BAIER:  Was the Steele dossier disinformation?

MAYORKAS: It’s not for me to opine on that.

BAIER: Americans are generally wary of anything that suggests censorship.

That's why this working group was set up, and we will do a better job of communicating about that, and I'm looking forward to testifying before the United States Senate on Wednesday.