Manchin on High-Five with Sinema: ‘The Two of Us Are Committed to Protecting the Filibuster’ 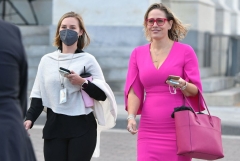 Senator Kyrsten Sinema (R), D-AZ, departs from the US Capitol in Washington, DC, on October 28, 2021. (Photo by MANDEL NGAN/AFP via Getty Images)

(CNSNews.com) - Sen. Joe Manchin (D-W.Va.) on Sunday explained the high-five he shared on stage last week with Sen. Kyrsten Sinema (D-Ariz.) at the World Economic Forum in Davos, Switzerland, saying that the two share the same commitment to protecting the filibuster.

“There's a moment, I don't know if you realized, that went viral between you and Senator Sinema. … I want to ask you about it. You guys are high-fiving. I think we'll show it again here. It was right after she was talking about the filibuster. Is that what you were high-fiving about?” NBC’s Chuck Todd asked.

“Yeah, that was – I think, you know, after that. I saw her hand go up and I said, "Sure" because here, the two of us are committed to protecting the filibuster, which I think protects checks and balances on the executive branch,” Manchin told NBC’s “Meet the Press.”

“You've got 53, 54 Republicans, and he would not, and I appreciate that, and I told Harry Reid we should not have done it when we did it in 2013, but to come back now, the checks and balances aren't there. It makes and forces them to work together,” Manchin said.

“Think what we've accomplished in the 117th, the most divided Congress we've ever had, and we did more substantial bills, I think that’s going to be transformational,” he said.