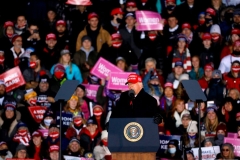 (CNSNews.com) – Talk show host Rush Limbaugh said Tuesday that despite assumptions to the contrary, he thinks the majority of early voters and absentee voters are Trump supporters who are fed up with the way that President Donald Trump has been treated.

“I look at the conventional wisdom, and I make it a point never to follow it. It's always wrong, and it’s group think. Why do you want to go along with what everybody else thinks? Early voting, absentee voting. What’s everybody think? Everybody thinks it's a bunch of Democrats that hate Trump showing up, because they hate the guy, and they can't wait to vote against, that's what the media has been telling us,” Limbaugh told Fox News’s “Fox and Friends.”

Limbaugh said he’s “very worried” that Biden might win the presidency and Democrats could win the Senate and keep control of the House.

I'm very worried. That's the whole point. Biden, the thing that frustrates me, Biden, he doesn't have a bond with his voters. He's just the generic Democrat with the D next to his name on the ballot. Kamala Harris had to get out of the Democrat primaries before a single vote was cast so the people that are really running this Biden-Kamala Harris operation are people we don’t--- we know who they are.

They’re big tech, social media tech giants and the media and so forth, but I think, these -- we've reached a point in America where the American left doesn't like this country.

They haven't liked it for a long time, and if they had the chance, Ainsley, they'll rip the Constitution to shreds as best they can and rewrite it, and they’ll make government-- government power the centerpiece of American life and the American people will not know what hit them because this isn't the old Democrats versus Republicans.

It used to be that the Democrats and the Republicans at least had the same objectives, wanted prosperity for people, wanted a good life, kids, a great future. We don't even have that in common with the Democrats anymore. There isn't overlap.

As far as I'm concerned they are to be politically defeated, not cooperated with and not gotten along with because I don't know that it's possible. It's not that I have any personal animus against them. It’s their policies and what they are promising to do to the United States of America. They want to ruin your kids’ future.

If you really care about the American way of life and what you think it is, it is on the ballot today, folks, and there's one guy standing in the way of the Democrats and the American left succeeding in this anti-American agenda and it's Donald Trump, and I would just—I would cringe if we lose this election because of somebody's personality, because they don't like somebody's personal-- the way, he tweets or speaks.

By the way you don't just drive up, go to the rally and leave. This is a full-day commitment that people have to make to go these, 57,000 people in Butler, Pennsylvania, and Joe Biden is drawing 2 to 3 people in cars, honking horns.