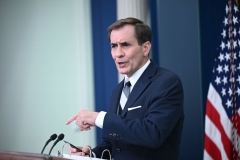 “You’ve long talked about how climate change is a national security issue for the country. I’m wondering if you view this as a national emergency, and if you believe that executive actions that will be announced are enough of a message to send to the world that the U.S. is indeed serious about climate change,” a reporter asked Kirby at the White House.

Biden is set to announce executive actions to address climate change now that Sen. Joe Manchin (D-W.Va.) has quashed efforts to pass legislation on the matter.

“I’m not going to get ahead of any announcements on specific actions with respect to climate, but let me take a step back. The Pentagon has noted, not just in this administration, but even the previous one that climate change is a national security issue,” the former Pentagon press secretary said.

“It has an impact on our readiness, because you– and you’re seeing it now even in the wildfires where so many National Guardsmen are being called out, and God love them for that, but those are important tasks and missions, but it takes away from other tasks and missions whether it comes to defending the United States,” he said.

“So there’s an impact on our own readiness just because our troops, our sailors, our Marines, our airmen, our Coast Guardsmen are being called out for– to respond to national disasters, which are getting worse because of climate change,” Kirby said.

“And then lastly, it’s a driver of actual missions, because climate change creates instability, which creates insecurity in some places, and you can end up– the fighting in Syria started really as a result of a drought,” he said.

“It can actually drive military missions and force the military to become involved in places and at times that it wouldn’t have had to otherwise. So again, I don’t want to get ahead of the president or any decisions he may or may not make, but the president believes this is a very important issue for our own national security, and we’re gonna treat it that way,” Kirby said.