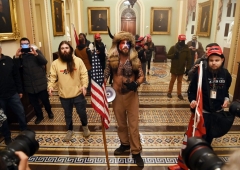 Supporters of US President Donald Trump enter the US Capitol on January 6, 2021, in Washington, DC. - Demonstrators breeched security and entered the Capitol as Congress debated the a 2020 presidential election Electoral Vote Certification. (Photo by SAUL LOEB/AFP via Getty Images)

(CNSNews.com) - The U.S. Capitol Building was placed in lockdown, and lawmakers were evacuated Wednesday as Trump supporters stormed the building.

This comes as a joint session of Congress was convened to certify Electoral College votes for Joe Biden, and lawmakers were meeting in both houses of Congress to debate an objection to the election results in Arizona.

“I hear a lot of rounds of ammunition going off, and look, this is a disaster,”  Rep. Adam Kinzinger (R-Ill.) told Fox News’s “The Daily Briefing with Dana Perino” on the phone, as protesters stormed the Capitol building.

He refused to disclose his location, but he described the scene as “a mess.”

The congressman commented on the remarks one protester outside the Capitol building said to Fox News’s Griff Jenkins, saying “this is the people’s house.”

“I just heard the person that Griff interviewed say that’s the people’s house. It is the people's house. We do things as a democracy, with order. We don't do stuff like this, and it's insane, and the president's tweets have been insane. The president needs to show leadership right now,” Kinzinger said.

“Bring out the D.C. Guard. Bring order so we can go forward with our constitutional responsibility, and every member of Congress after this should not be voting to object to this election, because this is nothing short of an attempt to take over the government,” the congressman said.

Kinzinger said he didn’t see the protesters breach the Capitol.

“No, not from my perspective from where I was, but I have a lot of friends I've been texting with that are there. I’m in a different area. They’re a little afraid. We have these emergency procedures and escape hoods and things, and we never thought we would have to use them, never especially thought we’d have to use them because people that consider themselves Republicans, which in fact is not a Republican value,” he said.

Perino noted that protesters are upset about the election and that Vice President Mike Pence did not reject electoral college votes as Trump had ordered him to do. She asked Kinzinger if he had a message for them.

“We don't live in Russia. We don't live in a third world country. We live in the greatest democracy of the world, and the thing that allows this democracy to work is an understanding that there is a process,” the congressman said.

“Just because conspiracy theories are put out on Twitter does not mean in fact that the election was stolen. It doesn't mean that Congress has the authority to unilaterally make a different decision on the election,” Kinzinger said.

“If you’re outraged, and I was upset by how the election ended up. That’s why you make a case, and you go out and convince people to vote for your side. We are not what we’re seeing today, and this better stop,  and leaders at all levels need to condemn this action,” he said.