Jordan: Pelosi Didn’t Want the National Guard at the Capitol Because of the Democrats’ Position on Defunding the Police 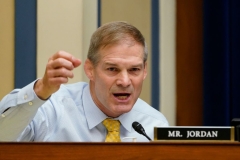 (CNSNews.com) - Rep. Jim Jordan (R-Ohio) said Sunday that the reason why House Speaker Nancy Pelosi (D-Calif.) didn’t call in the National Guard on Jan. 6 is because of the Democrats’ position on defunding the police.

Jordan said that last week’s prime time Jan. 6 congressional hearing didn’t explain why the U.S Capitol was so vulnerable and why the front-line cops weren’t aware that violence was going to happen.

“Yeah, Maria, you're right, we didn't learn anything about the answer to that question from the hearing the other night, and only one person can really answer that question. That's the speaker of the House, and guess what?” the congressman told “Sunday Morning Futures.”

“The chairman of this committee, Bennie Thompson, has said she’s off limits. He's not going to ask her anything. He’s not going to call her. They're not going to depose her, but she's one who was offered the National Guard from the White House,” Jordan said.

“We know that. We had countless people tell us that. President Trump said if you need the National Guard there that day, they're available. She didn't take him up on that offer, because according to correspondence, according to testimony that we had received and media reports, I should say, the sergeant at arms says that the speaker's office didn't like the optics of that, and you know why they didn’t like the optics?” he said.

“Because you can never forget the context here. In the summer of 2020, they called rioters and looters peaceful protesters all summer long, and so with that as the backdrop and that as the framework, it's kind of tough then on January 6th to say, you know what? We want more law enforcement. We want the National Guard to protect the Capitol,” Jordan said.

“I think that's the reason they didn't do it, because of their position on defunding the police and the position they took during the summer of 2020, but she should be asked that question. That's something that if the American people put us in charge, we will get to the bottom of, and we'll get an answer to,” he said.

Jordan said that the American people didn’t learn anything new at last week’s primetime congressional hearing on Jan. 6, and they’re focused instead on things like $5 a gallon gas.

“You know, it's kind of like the home team playing at home and the ref's on their side, and they still can't win the game. That was sort of my takeaway, and I think that’s the American people’s takeaway, because they’re focused on the things you’ve already just mentioned,” Jordan said.

“They’re focused on $5 gas, 41-year high inflation, a border that's no longer a border and crime that's on the rise in every major urban area in this country,” the congressman said.

Jordan said that if the Republicans win the majority in the House in fall, they’ll ask to see all the depositions and documents that the Jan. 6 committee has.

“Well, we'll investigate -- I want to see all the depositions,” the congressman said.

“I want to see all the documents, and ranking member Rodney Davis has already sent a preservation letter to the committee, saying preserve all this information so we can look at it, and the American people can get the full story, not just this one-sided, choreographed presentation we got the other night, but when you think about what this committee's done, never in the history of this country, in the history of the House of Representatives has a minority leader not been able to put on a select committee the individuals he or she has selected,” he said.

“We also know that this committee has altered evidence and lied about it, so much so that they had to issue a statement which says we regret the error which is government-speak for we got caught lying. So that’s what this committee’s about. I think the country sees it for what it is, a partisan political activity. That's why the leader and I wrote the op-ed that we did in the ‘Wall Street Journal’ a couple weeks ago,” Jordan said.