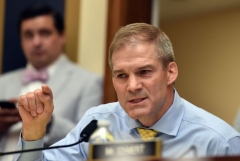 Representative for Ohio, Jim Jordan, asks a question during a congressional House Judiciary Committee hearing on "Oversight of FBI and DOJ Actions Surrounding the 2016 Election," in Washington, DC, on June 28 2018. (Photo by NICHOLAS KAMM/AFP via Getty Images)

(CNSNews.com) – Rep. Jim Jordan (R-Ohio) on Friday pointed to Operation Warp Speed as just the latest example of President Donald Trump “getting done what he said he would do.”

“No president in my lifetime has accomplished more of what they have told American people they were going to do than President Trump, and this is one more example even though experts said it wouldn't happen until 2021. It in fact is happening as we speak,” the congressman said in an interview with Fox Business’s “Mornings with Maria Bartiromo.”

“Second, you’re exactly right. First time in American history where you have had a major political party, set out to win an election after the election, and what I mean by that is this mail-in balloting you talked about Maria, I said this clear back in the summer. I said we know on election night President Trump’s going to be winning, but Democrats went all confusion, throwing out live ballots,” he said.

“We had a staff member get four ballots sent to her residence, four ballots. She got her ballot and four other ballots that were from people who had already moved. They knew this kind of chaos was going to happen and it was going to allow them to win the election, after the election and keep counting and finding ballots, as they did,” Jordan said.

“So, yeah, … I wish it wasn't the case where they went to that route because I think it was designed to create the confusion that we saw, in this last election make it difficult for President Trump to win,” the congressman added.