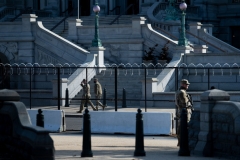 Members of the National Guard patrol the grounds of the US Capitol on March 4, 2021, in Washington, DC. (Photo by BRENDAN SMIALOWSKI/AFP via Getty Images)

(CNSNews.com) – Rep. Jim Jordan (R-Ohio) said Wednesday that while he hasn’t been briefed on a specific threat to the Capitol, the decision to adjourn the House until Monday may be a good idea considering that Democrats plan to “radically change” election, police, gun, and immigration laws.

“I haven't got a briefing, but you know this fits in with what the Democrats want to do. They have compound around the Capitol. We said this many times. You said on your show we can't build a wall on the border. We got a border that’s unsecured. We got a border that’s open, but we got a wall around the Capitol,” Jordan said Wednesday on Fox News’s “The Ingraham Angle.”

As CNSNews.com reports, the House has adjourned until Monday - although the Senate is in session – because the U.S. Capitol Police said they obtained intelligence showing “a possible plot to breach the Capitol by an identified militia group.”

“They’re gonna radically change … gun law next week, and they are going to change immigration laws to add to the fact that the border is already open and unaccompanied minors are flooding across into our country. So maybe it’s a good idea that we’re not here, but I don't know that the threat’s that critical. We’ve not got a briefing. All members have not got a briefing, so I just don't know, but my guess is it’s probably not that serious, but I just don't know for sure,” he said.

Host Laura Ingraham pointed out that there was “chatter all the time” even during the Trump administration, and she asked Fox News contributor Kimberly Strassel whether the militarized zone around the Capitol will ever end.

“I actually heard some former FBI folks on TV tonight, saying that if there is a one percent chance something could happen it's the obligation of Congress to close up shop and I guess go home, and I'm thinking to myself that’s an interesting scenario, because we know there’s chatter all the time. We know it. There was in the trump administration. Lord knows. So this is going to keep happening or the militarized zone is never going to end?” Ingraham said.

“You just put your finger on the important thing, Laura. Is this a different standard than one that we have had in the past? We rely on law enforcement to deal with these threats. We want Congress to be safe, but is this the sort of thing that would have shut down Congress previously,” Strassel said.

“We don't know as even the congressman said, we haven't had the briefing, but you can certainly see a certain agenda in Democrats' actions right now, including in the White House, because they want this to be a theme,” she said.

“Look, they’re gonna try to keep what happened on January 6 alive as an argument that the only extremists out there in the country fall on one side of the political aisle insurrection other words, because this is their way of trying to undercut all conservative policies and the Republican Party, but that is a very different thing, and I think it's dangerous,” Strassel added.

“We should not be playing games with what are threats - credible or diminishing them or overhyping them because it gets in the way of law enforcement to do their job correctly,” she said.

Ingraham asked Jordan why any state should stay locked down when we have an open southern border.

“It’s the thing that makes common sense. ... If you’re an American, and you go outside and don't wear a mask some liberal’s gonna scream at you and say you’re killing grandma, but if you are a COVID-positive migrant, come on in. That’s what they’re telling you – one hundred summoned to one city in Texas. Kim said this best,” Jordan said.

“This double standard, it’s driving Americans crazy. So we are not going to protect the southern border, protect the country, but we’re gonna put a wall around Congress and we get a few things on the internet, we’re gonna shut down Congress. It makes no sense. Good common sense. Democrats in Congress don't have any,” he added.