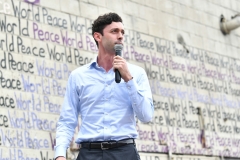 “Let me just be very candid about this, because we all know what's going to happen if McConnell holds the Senate. He will try to do to Biden and Harris just like he tried to do to President Obama. It will be paralysis, partisan trench warfare, obstructionism as far as the eye can see, at a moment of crisis, when we need strong action,” Ossoff said.

Host Dana Bash noted that the last time Georgia had a Senate run-off election was in 2008 and Democrats barely got half as many votes as he did in November.

“The Republican ended up winning the run-off by 15 points,” Bash said. “So what makes you think this won’t happen to you?”

“And a lot has happened in Georgia in 12 years, an extraordinary movement to register voters, to mobilize communities, to train volunteers and get out the vote. This infrastructure that we have built here for the last eight years is extraordinary, and it's why Joe Biden carried the state,” Ossoff said.

“And Georgia Democrats are motivated to participate, because we recognize that, to get out of this crisis, to get financial relief to businesses and families who are suffering, and to enact a broader legislative agenda, expanding voting rights and civil rights, investing in clean energy and addressing climate change, making sure that health care is affordable for every family, this requires victory in these two Senate run-offs. We know the stakes, and we're motivated to make a difference,” he added.

Bash pointed out that even with Biden on the ballot, Democrats lost almost a dozen House seats and “didn’t win majorities in about a dozen state legislative chambers that they were really targeting.”

“So, what makes you so sure that Republicans who voted for Biden won't use this, your race, as an opportunity to have a check on him?” she asked.
“Well, what we need is the capacity for this incoming administration to govern in the midst of a crisis. I mean, so many families here in Georgia and across the country can't feed themselves right now. Businesses are on the brink. Folks are looking at eviction and foreclosure,” Ossoff said.

Ossoff called his opponent, Sen. David Perdue (R-Ga.) a “crook” after the DOJ opened a probe into Perdue’s stock sales for possible insider trading but closed the case without bringing any charges.

Bash asked what evidence Osssoff has to support his claim that Perdue is a “crook.”

“Well, I think that the standard of conduct for a sitting U.S. senator needs to be higher than that he wasn't indicted for egregiously unethical misconduct. Senator Perdue was buying up shares in manufacturers of vaccines and medical equipment and dumping his casino shares while he had access to classified briefings on COVID-19 and was telling the rest of us this was no deadlier than the flu,” Ossoff said.

“And all year, Senator Perdue has been lying to the public and the press, insisting that he had no control over his stock trades, but this new reporting reveals that, the FBI investigation, the banking records reveal he was, in fact, personally directing his own stock trades,” he said.

“So, now Senator Perdue needs to come out of hiding. It's not enough for him to say, well, I wasn't prosecuted. He needs to explain why he's been lying all year about the level of personal control he has over his portfolio. This is grossly unethical misconduct for a sitting U.S. senator,” Ossoff said.

“But calling him a crook suggests that he committed a crime, which, again, the Justice Department has found no evidence of. They didn't even pursue charges. Fair?” Bash asked.

“No, I don't think so. I think that a sitting U.S. senator exploiting his office, exploiting his access to privileged information, exploiting his power to enrich himself, while his own constituents are suffering and dying, absolutely makes Senator Perdue a crook, and he's afraid to come out and debate me, because he won't answer these charges, because he can't defend the indefensible,” Ossoff said.

Bash pointed out that Sen. Bernie Sanders (I-Vt.) endorsed Ossoff, and she asked whether he supports Sanders in the senator’s bid to serve as Biden’s labor secretary.

“I'm not making recommendations to the administration on Cabinet picks, but I appreciate the senator's support and look forward to working with him to fight for a $15 minimum wage, to put the interests of working families ahead of corporate lobbyists in Washington, to address this climate crisis, invest in clean energy, and look out for ordinary working people for a change, instead of people who have bought access and power in Washington,” Ossoff said.

When asked whether he wants Sanders to go to Georgia and campaign with him, Ossoff said, “We will see. I haven't had that kind of discussion with him, but I welcome his support, and again, look, I think that the advocacy for ensuring that health care is a human right in this country, for putting the interests of working families over corporate interests is welcome, is necessary, is appreciated, and so is his support.”