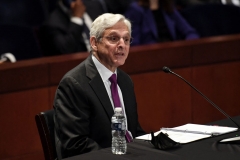 US Attorney General Merrick Garland testifies at a House Judiciary Committee hearing on "Oversight of the United States Department of Justice," on Capitol Hill in Washington, DC, October 21, 2021. (Photo by OLIVIER DOULIERY/AFP via Getty Images)

(CNSNews.com) - Rep. Mike Johnson (R-La.) grilled Attorney General Merrick Garland on Thursday about whether he sought ethics counsel before issuing a memo responding to the National School Board Association’s request for the DOJ to address threats and violence from parents upset about critical race theory being added to school curriculum.

During a House Judiciary Committee oversight hearing, Johnson pointed out that Garland’s son-in-law co-founded a company that publishes and sells critical race theory to schools nationwide.

JOHNSON: Millions of Americans are deeply concerned today that instead of addressing the most pressing issues facing our country, we’re watching the Biden Garland Justice Department be weaponized, that you are using your authorities now to advance far-left policies and attack Republican-led state actions and erode constitutional norms. The most recent case in point has been brought up this morning - your memorandum directing the FBI and other Department of Justice officials to get involved in local school board debates.

It concerns us that it was issued just 5 days after the National School Board Association sent a letter to President Biden which referred to concerned parents as ‘the equivalent of domestic terrorists and perpetrators of hate crimes.’ Given the timing of all this your memo appears to have been motivated by politics more than any pressing federal law enforcement need. This is concerning to us, and it’s worthy of investigation. It also concerns us that your actions may have been motivated by your family’s financial stake in this issue.

Published reports show that your son-in-law co-founded a company called Panorama Education. We now know that that company publishes and sells critical race theory and so-called anti-racism materials to schools across the country, and it works with school districts nationwide to obtain and analyze data on students often without parental consent.

On its website, the company brags that it’s surveyed more than 13 million students in the U.S. It’s raised $76 million from powerful investors, including people like Mark Zuckerberg, just since 2017. My first question is this: Are you familiar with Title V of the code of federal regulations which addresses the rules of impartiality for executive branch employees and officials?

GARLAND: I am very familiar with it, and I want to be clear once again that there’s nothing in this memorandum which has any effect on the kinds of curriculums that are taught or the ability of parents to complain about the kinds of--

JOHNSON: I understand your position on the free speech of parents--

GARLAND: It’s not a position. It is--

JOHNSON: Wait just a minute. The question is, the question is the thing that has concerned many of those parents who show up at the school board meetings, the very basis of their objection and their vigorous debate as you mentioned earlier is the curricula, the very curricula that your son-in-law is selling, so to millions of Americans, I mean my constituents - I was home all weekend. I got an earful about this. They’re very concerned about that.

Sub part E of that federal regulation says an employee of the executive branch is discouraged from encouraging con-- engaging in conduct that’s likely to affect the financial interest of someone close to them. Your son-in-law, your daughter clearly meets that definition, and so the question is, did you follow that regulation? Did you have the appropriate agency ethic agency look into this? Did you seek guidance as the federal regulation requires?

GARLAND: This memorandum is aimed at violence and threats of violence--

JOHNSON: I understand that but did you seek--- Excuse me. Did you seek ethics counsel before you issued a letter that directly relates to the financial interest of your family - yes or no?

GARLAND: This memorandum does not relate to the financial interest of anyone. It’s a--

GARLAND: --- memorandum against violence and threats of violence.

JOHNSON: Will you-- Mr. Attorney General, will you commit to having the appropriate ethics designee review the case and make the results public?

GARLAND: This memorandum is aimed at violence and threats of violence--

JOHNSON: I understand your talking point. You’re not answering my question, Mr. Attorney General. With all due respect, will you submit to an ethics review of this matter? Yes or no.

GARLAND: There’s no company in America or hopefully, no law-abiding citizen of America who believes that threats of violence should not be prevented. There are no conflicts of interest that anyone could have.

JOHNSON: According to you, but sir, with due respect, that’s the purpose of the regulation. We need objective third parties to review our activities. You don’t get to make that decision yourself. It doesn’t matter. You’re the top-- you’re the chief law enforcement of this country. This raises questions in the minds of millions of Americans, and your impartiality is being called into question. Why would you not submit to a simple ethics review of that?

GARLAND: I am exquisitely aware of the ethics requirements.

JOHNSON: But you’re not following them.

GARLAND: I have followed them and lived with them for the last 25 years.

JOHNSON: Did you seek an ethics review of this or not?

GARLAND: I’m going to say again. There are no conflicts of interest involved when the Justice Department--

JOHNSON: Okay, okay. I get that. I’m not trying to be disrespectful, but you are not respecting our rules, our constitutional norms, and the federal law that directly applies to your activities. This is a great concern. This is why people are losing faith in our institutions. They’re losing faith in this Department of Justice, and you and I both know as constitutional attorneys that if the people lose their faith in our system of justice, if they lose faith in the idea that justice is blind, that there’re not two standards, that there’s one standard of the law --

Judiciary Chairman Jerrold Nadler (D-N.Y.) interrupted to tell Johnson his time had expired, and asked if the attorney general wanted to respond to Johnson’s comments.

GARLAND: All I can say is I completely agree that the rule of law and respect for it is essential, and I will always do everything possible to uphold that and to avoid any kind of conflict of interest.

JOHNSON: But you will not submit to an ethics inquiry.