Jim Jordan: ‘I Don’t Think the American People Like Being Threatened’ 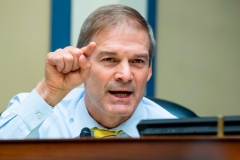 “They get confirmed, but only once out of eight times has someone when there's a difference in who has the White House and who has control of the Senate, only one in eight times when someone's been brought forward in an election year, so this is following the law, following the Constitution, and frankly, following the historic norms of our country,” Jordan said.

Jordan considered it a threat to the American people that Democrats threatened to pack the court or conduct impeachment hearings to prevent Trump from nominating someone to the high court.

“I don't think the American people like to be threatened. I mean Jerry Nadler said, if you move forward with this nomination, and the Senate is won by the Democrats in the election, that they are going to pack the court. They’re gonna add six new seats to the court and take it from 9 to 15,” Jordan said.

“Pelosi says today she's going to go with impeachment if they move forward. I don't think the American people like being threatened I think they like the president of the United States following the law and putting someone on that court who’s gonna to respect the Constitution,” he said.

As CNSNews.com reported, House Speaker Nancy Pelosi (D-Calif.) did not rule out the possibility of pursuing impeachment again, referring to the responsibility “to use every arrow in our quiver” when asked about ways to prevent a Supreme Court nominee confirmation this year.

“We have arrows in our quiver that I’m not about to discuss right now, but the fact is we have a big challenge in our country. This president has threatened to not even accept the results of the election, with statements that he and his henchmen have made,” she told ABC’s “This Week with George Stephanopolous.”