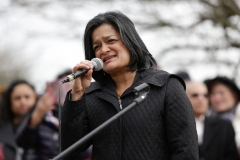 (CNSNews.com) - Rep. Pramila Jayapal (D-Wash.) refused to say Sunday whether she would still vote for the COVID relief bill if a $15 minimum wage hike is not included.

In an interview with CNN’s “State of the Union,” host Dana Bash asked Jayapal, “So, “yes or no, if minimum wage is not included in the final COVID bill, will you still vote for it?”

Bash pointed out that President Joe Biden said that a minimum wage hike might not happen in the COVID bill.

When asked whether Biden was fighting hard enough for it, Jayapal said, “Well, the president came out very strong early on, saying he wanted a $15 minimum wage in this bill. He has been fairly consistent on that.

“I know there are questions about whether or not the Senate can get it through, but I can tell you, Dana, this $15 minimum wage increase would mean 30 million Americans would get a raise. A million Americans would come out of poverty, and 30 percent of those minimum wage workers are black; 25 percent are Latinx. It is absolutely essential that we do it, and I believe the Senate will do it,” she said.

“You said that he's -- was consistent, but he's also said he doesn't actually think it's going to end up in this bill,” Bash said.

“Well, let's see. I think he's speaking as he's thinking about whether or not it's going to make it through, according to the parliamentarian's rule, but I have been speaking with Senator Sanders pretty regularly, with Speaker Pelosi, with the White House, and if Republicans could give a $2 trillion tax break to the wealthiest people and stop Arctic drilling, then -- or continue drilling in the Arctic, then I think that Democrats can make sure that 30 million Americans get a raise,” Jayapal said.

Bash pointed out that Jayapal said they can’t let one or two Democrats prevent the minimum wage hike from being in the relief bill, but there are two Democratic senators not on board - Sens. Joe Manchin (D-W.Va.) and Kyrsten Sinema (D-Ariz.).

“What's your message to them?” Bash asked.

“My message is, 30 million Americans deserve a raise. We have not raised the minimum wage in 12 years, and the place that people are in today, where they can't put food on their table -- essential workers, many black, brown and indigenous, are going to work every day, and trying to exist on $15,000 a year,” Jayapal said.

“You just can't feed a family, much less put anything away for any emergencies, and so, if we're going to be real about tackling racial inequity, economic inequity, then we are going to have to raise the minimum wage, and let me just say this. It is good for communities. It's good for businesses,” she said.

“I know because we were the first major city in Seattle to raise the minimum wage to $15 over a period of years, and, in 2018 and 2019, ‘Forbes’ ranked us the best place in the country for businesses and for careers. We had one of the lowest unemployment numbers in the country, and so we know that this is good for everyone,” the congresswoman said.

On the stimulus direct payment, Bash asked Jayapal whether the income threshold to receive $1400 must stay at $75,000 or is it okay to lower, which Biden indicated he’s willing to do.

“It absolutely has to. Dana, if you raise those income thresholds, you're going to cut out 40 million Americans who got a relief check under Donald Trump who won't get a relief check under Joe Biden. That doesn't make any political sense to me, but from a policy standpoint, if you really wanted to target these checks, you would have recent income numbers,” Jayapal said.

“The fact is, most people are going to be going according to 2019 incomes, and we know tens of millions of Americans lost their jobs in 2020. So, these income thresholds need to stay the same. Progressives fought for that in the House, and they are the same in the House, and so I'm really pleased with that,” the congresswoman said.

"And I believe that's going to be -- that's going to be the case in the Senate as well, because we just have people who are suffering, food banks with lines going around the block across the country. We need to get money in people's pockets, and this is the quickest way to do that,” she said.

“We want at least $50,000 canceled. We believe -- again, this is $1.7 trillion of student debt, and if you cancel that debt, you give a lifeline to millions of people across this country. So, let's work on it together,” Jayapal said.

“Obviously, if Congress could do it, that's great, but we believe that the president has the authority to do it, and we have been in conversation with the White House about it, and we urge President Biden to use every tool in his toolbox and get relief to people at this critical time,” she said.

As to whether Biden is living up to his promise to be the most progressive president, Jayapal said, “Well, I think he has been doing a really great job coming out of the gates strong.

“I think what we need to do is finish strong all the promises that have been made during the campaign to deliver relief to people, to make sure people understand what happens when Democrats control the House, the Senate and the White House, is, we deliver relief,” she said.