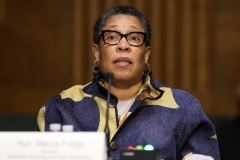 (CNSNews.com) – HUD Secretary Marcia Fudge denied Thursday that her agency’s decision to waive a regulation requiring emergency housing vouchers to prove their legal status will “in any significant way” increase the risk that illegal immigrants will obtain housing vouchers that are meant for U.S. citizens.

At a Senate Banking Committee hearing on infrastructure, Sen. Pat Toomey (R-Pa.) asked the secretary, “So back in March a couple of months ago, our Democratic colleagues passed a spending bill that provided $5 billion for emergency housing vouchers to be distributed to people experiencing homelessness, victims of human trafficking and other circumstances.

“Under that law and HUD’s own regulations, illegal immigrants are not eligible for these vouchers, but just yesterday, Fox Business reported that HUD recently issued guidance that will have the effect of making it easier for illegal immigrants to obtain these emergency housing vouchers that are supposed to be meant for Americans,” he said.

“This happens, because, as I understand it, the new guidance waives an existing HUD regulation that requires public housing authorities to obtain and verify documentation that an applicant for a housing voucher actually has a legal immigration status as opposed to an illegal status at the time of application,” Toomey said.

“HUD’s own regulations say this requirement, the one HUD is waiving if this report is accurate, this requirement is meant to ‘decrease the incidents of fraud, waste, and abuse.’ HUD’s guidance may now allow illegal immigrants to obtain these housing vouchers that as I said are meant for American citizens,” the congressman said.

“So Secretary Fudge, isn’t it important that we follow the law and the HUD regulation and have processes in place to minimize the risk that these vouchers go to people who are not supposed to have them?” he asked.

FUDGE: Yes, Senator. Indeed, it is, and I thank you for the question. I think that it is very, very clear from our May 5th public notice detailing the operating requirements for the emergency housing vouchers program. It is clear that in line with current law, eligibility for assistance is limited to United States citizens and those with legal residency.

FUDGE: I do not believe that it will do that in any significant way, Senator. I think that to say that would assume that every single illegal resident wants to come and scam the system. That is not how this works. People who are homeless generally do not have identification. They don’t have Social Security cards, et cetera, and So what we have done is allowed our housing authorities and partners to come up with ways to allow them to at least initially report themselves to self-certify and then we verify. So if we find that someone is in the system that should not be, We certainly will take care of it.

TOOMEY: So first of all my question does not in any way imply that everyone here illegally is looking for these vouchers. There’s no such suggestion. I’m simply saying that if there is not an opportunity to screen out people who are not actually eligible, if we don’t have that mechanism, then there is likely to be some abuse of this system, and it would inevitably will take months at best to discover and then litigate and adjudicate these cases.

I would just urge you to reconsider this. This is HUD’s own regulation that’s being waived is described by HUD as serving the purpose of decreasing incidents of fraud, waste and abuse. So I would---

FUDGE: I am certainly willing to do so, Sir. I will take another look at it.