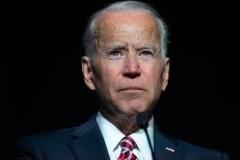 (CNSNews.com) - Former Arkansas Gov. Mike Huckabee said Wednesday that although former Vice President Joe Biden considers himself a moderate Democrat, the key to telling whether that’s true is to watch who he appoints to his cabinet.

“There’s something that you don't seem to understand. The Constitution was secretly rewritten so that it's no longer the voters who make the decision. It's the media networks who get to make the decision as to who is the president, and why even wait for the votes to be counted? No need for that. Why wait for them to be certified? They know what they want, they want it now,” Huckabee joked during an interview on Fox News’s “The Ingraham Angle.”

“But here's what I think is interesting. I mean Joe Biden hadn't quite been certified yet. It's always better to heat the oven before you put the biscuits in. It's better to shoot the deer before you try to put it in the freezer, and I think Joe may be getting a little ahead of himself out there,” he said.

Ron Klain has already been selected as Biden’s chief of staff. He was responsible for leading the Obama administration’s Ebola response.

As CNSNews.com reported, Sen. Bernie Sanders (I-Vt.) said he would accept a job as Labor Secretary if asked.

Huckabee said that Biden’s supporters will expect him to appoint them or they’ll “revolt.”

“So he’s going to have a mutiny on the bounty right there in his own White House, in his own party. I do think when I hear people say he's a moderate, let's see. Let's see who he appoints, because personnel is policy. That's something you learn real early when you get into government work. The people you surround yourself with, that's what your policy is,” Huckabee said.

“You can make all the speeches in the world, but The people that you bring in to implement your goals, that is going to really determine your policy. So we will find out if Joe is a moderate or not. My guess is not nearly as much as people think,” he said.

Huckabee said Biden “has already made a commitment that he believes we should have abortion up until the moment of birth and beyond” and that “taxpayer ought to fund it.”