Huckabee: Outsourcing Americans’ Protection to the Taliban Is Like ‘Outsourcing Your Diet Plan to Michael Moore’ 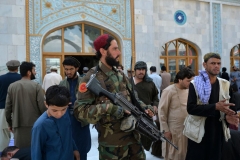 (CNSNews.com) – Former Arkansas Gov. Mike Huckabee said Friday that the Biden administration might be able to change the focus from the Americans left behind in Afghanistan if the media doesn’t “keep pressing the story.”

Fox News host Martha MacCallum said, “I was just thinking about Antony Blinken. He talked about the strongly worded letter from 100 countries and the U.N. resolution and how much the Taliban loves to travel, and boy, those leaders if they can't travel, they'll step in line and do everything that they promised us they would do, but Governor Huckabee, we're already seeing that that is clearly not the case.

“We’re getting reports of people being mistreated, people being killed, tracked down, people getting texted, we know where you live, we're coming to get you. You can make the story go away but is it?” she asked.

“It might,” Huckabee said, “because the press lacks the curiosity and the natural cynicism that we need in the press in order to keep pressing the story. The fact is, they let Joe just turn his back and walk away, but outsourcing the future of Americans stranded and held hostage in Afghanistan as Bill aptly said, but to outsource their protection to the Taliban is like outsourcing your diet plan to Michael Moore.

“This is insane. Right now Joe Biden is talking about let's deliver some resources to the people in the northeast and to the Gulf Coast who have gone through a terrible weather system. Eighty-five billion dollars of resources that we might use for Americans is right now being inventoried by the Taliban and adding to their own military capacity to use against us. That's insane,” Huckabee told Fox News’s “The Story with Martha MacCallum.”

Wall Street Journal columnist and editorial board member Bill McGurn said President Joe Biden “is making a very cynical bet that between the media disinterest, the lack of cameras in Afghanistan and just fatigue that the united States -- people in the United States won't care about what happens to the people we left behind in Afghanistan.”

“I think that’s the bet he's making. At the same time, he's trying to spin it as a victory. You know, being very stubborn about that. So I think the important thing is to focus on look, we do have to have a lot of hearings. The president said some very misleading things that were contradicted by other people in this administration. It's very murky what happened and why,” McGurn said.

“Did all the military support his decisions as they claim they did? We have to find those out, but Mostly we have to know what to do going forward,” he said, adding that “9/11 is a grim day this year with the Taliban hosting parades with a lot of our captured weaponry and cars and so forth for their victory while we mourn the dead from an attack 20 years ago.”

“So we have to think about going forward, and one of the biggest things that nobody is really talking about, the Americans we left behind as well as the Afghans that worked for us. They're hostages now, and they give the Taliban leverage,” McGurn said.

“So when we talk about, for example, could Joe Biden declare the Taliban a terrorist organization, could he threaten them? I'm not sure he can because they have these hostages. They may be in their homes and unmolested by the government now, but the Taliban knows they're there. That's a powerful leverage on their behalf for getting what they want, whether it's recognition or money,” he added.