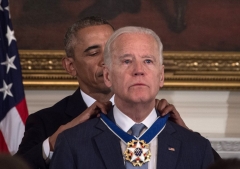 President Barack Obama awards Vice President Joe Biden the Presidential Medal of Freedom during a tribute to Biden at the White House in Washington, DC, on January 12, 2017. (Photo by NICHOLAS KAMM/AFP via Getty Images)

During an appearance on Fox News’s “The Story with Martha MacCallum,” Huckabee began by commenting on Rep. Pramila Jaypal’s (D-Wash.) call for $3 to 4 trillion in COVID relief and saying that Biden’s $1.9 trillion COVID relief package should be considered the “floor” not a ceiling.

“Why stop there? Let's make it $25, 50 trillion? Let's just give everybody anything they ever wanted. Let government be Santa Claus. She said that's the floor. Heck, I’m on the floor thinking about how crazy this is. Joe Biden said he wanted to fight for me. My gosh, I'd hate to think if this is what he's doing for me, what he would be doing to me if he was fighting against me,” Huckabee said.

“A lot of these executive orders are killing people's jobs all over the country, especially in the energy field, and despite the fact that 58 percent of Americans don't want taxpayer-funded abortions, he's pushing ahead. Seventy-seven percent including Democrats - this isn’t a bipartisan issue - don't want America to be paying for foreign abortions,” the former governor said.

“He just suspended the Mexico City policy, which does that. This is not a unity president. This is not a gee, let's all come together. Joe Biden is making Barack Obama look like Ronald Reagan in terms of his leftist policies, and I think a lot of people that voted for him, goodness, I hope they’re as disappointed as they need to be over this,” Huckabee added.

Fox News contributor American Enterprise Institute’s Marc Thiessen said that people shouldn’t be surprised that Biden, “representing a far left liberal Democratic Party is doing something by executive order that we as conservatives don't like.”

Thiessen warned that if Biden goes too far, it will create a backlash, “and it’s gonna come back to haunt him.”

“Keep in mind, it was Barack Obama going and saying, elections have consequences and I won. That led to the backlash that started the Tea Party movement and eventually over time created Donald Trump,” he said.

“If Joe Biden doesn't tack to the center and to the moderate path and try working with Republicans -- he just had 10 Republican senators come to him in the Oval Office yesterday and offer their hand outstretched and saying let's work on a scaled-down COVID relief bill where we can find consensus - $618 billion,” Thiessen said.

“That’s on top of the $900 billion we just passed a few weeks ago. So $1.5 trillion since Biden was elected. That’s real money. That’s a lot of money, and he seems to be uninterested in compromising with them. That means his whole promise of his inaugural address is a lie,” he said.