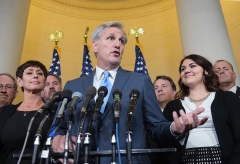 “All across this country, we’re seeing communities opening up safely. In California, we're opening up churches. We're opening up hair salons. Even today in America, we’re going to send astronauts back into space. The only place that hasn’t been opening is here on the Capitol inside the House,” McCarthy said at a press conference outside the U.S. Capitol building.

“We know that we have the responsibility that is essential that Congress does its work. Today for more than 231 years, never have we seen a proxy vote on the floor of the House. This challenges the Constitution only to protect and empower a speaker. It violates the Constitution. It’s a dereliction of duty by its members. We look at the history of America through yellow fever of 1793, the Civil War, the burning of this Capitol during the war of 1812, the Spanish flu of 1918, and even 9/11,” he said.

“Congress has never flinched from its constitutional duty to uphold and assemble inside this body, but today is different. As of right now this morning, 71 Democrats have written to the House clerk to have their vote by another member. At last I checked, one member in this body on the Democratic side will vote for five different states just in this proxy scheme. If I look to California Democrats, more than half of them at last I checked 27 Democrats filed to vote by proxy,” McCarthy said.

He pointed out that only 12 Democrats did not show up to vote for Pelosi’s $3 trillion coronavirus relief bill the Heroes Act when it was passed, compared to dozens more who didn’t show up today.

“When you look at the Heroes Act, I think it was only 12 Democrats who did not show, and now 71. Inside what Pelosi wanted to put forward on the proxy, she said only if you physically cannot come to the capitol to do your work. The Democrats continue to fail in their leadership. The Constitution is very clear about this. The founders believed we should assemble,” McCarthy said.

He warned that there’s nothing stopping Democrats from using the proxy vote process to make up their own rules.

“If the Democrats are successful in allowing a proxy vote to make their own rules, what stops them from making a rule that only certain people can vote or certain members cannot have a full vote or half vote. Nothing,” McCarthy said.

“Yes, the House can make the rules, but they cannot make something different than the Constitution says. It is very clear in the Constitution from Article 1 all through that the House is supposed to assemble. This is unconstitutional what the Democrats are doing. It’d be quite interesting today even if they bring up the FISA bill and try to move a rule. There’ll be more Republicans on the floor than there are Democrats,” he said.

“Whatever the Democrats propose to bring up cannot become law because it’s unconstitutional. That is why I stand with the members behind me and constituents across this country in upholding the Constitution, exactly what we swore we would do. The founders believe we should assemble and we should work just as we’ve done through every challenge this country has had,” McCarthy said.

“While other states open up, Pelosi continues to try to shrink. It is essential that the House continues to meet, and that’s why we’ll move forward with the lawsuit to uphold for the constituents across this country,” he said.