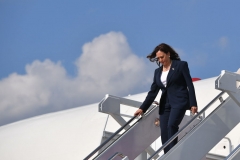 Vice President Kamala Harris deplanes upon arrival at Andrews Air Force Base in Maryland on June 14, 2021. (Photo by MANDEL NGAN/AFP via Getty Images)

(CNSNews.com) - House Democrats blocked a bill called “See the Crisis Act” sponsored by Rep. Ashley Hinson (R-Iowa), which would have blocked Vice President Kamala Harris from traveling internationally on the taxpayers’ dime until she visits the U.S.-Mexico border.

"It's unacceptable that after nearly two months as the Administration's so-called point person on the border crisis, Vice President Kamala Harris still hasn't visited the Southern Border and heard directly from the brave law enforcement officers about what they are facing on the ground,” Hinson said in a statement last month.

“As illegal immigration has surged, cartels are emboldened, and record levels of fentanyl are pouring into our country, this crisis continues to be out of sight and out of mind for this Administration. This bill will stop Vice President Harris from traveling internationally on the taxpayers' dime until she visits the Southern Border and reports to the American people on the steps the Administration is taking to address this crisis," she added.

Speaking on Fox News’s “Fox and Friends” Tuesday after the bill was blocked from consideration Monday, Hinson said her bill just seems like common sense.

“It comes down to holding the Biden administration accountable. You heard Vice President Harris laugh when she was asked about this. This is not a laughing matter. This is a safety and security issue for Iowa families and for American families, and so we're simply looking to hold the administration accountable until they actually come up with a plan to fix the crisis at the border, which is a direct result of their policies,” she said.

“So my ‘See The Crisis Act,’ which was blocked last night on the floor would do exactly that. It would make sure that she can't use taxpayer dollars to fly in Air Force 2 internationally until she actually goes and visits with the men and women at the border who are putting their lives on the line every day to keep this country safe,” the congresswoman said.

Hinson has been to the border, and she said her constituents are asking when the vice president is going to the border.

“When you see fentanyl seizures up 233% - we are on track to have record border crossings this year over 180,000 in May alone - people on the terrorist watch list, the gangs, the traffickers, business for the cartels is really good under this administration right now. So, I think it is in her best interest, and it's most importantly it’s in our country's best interest for the vice president to go the border,” the congresswoman said.

“So again, we last night tried to bring this to the floor to hold the administration accountable. I can say I’ve done that, but the Democrats in Congress can't say the same that they are protecting their constituents in this way,” Hinson said.

The congresswoman said she talked to both Democrat and Republican sheriffs and mayors when she visited the border, because it’s “not a partisan issue.”

“If you go down to the border and hear from them directly, you’ll hear they are crying out for help right now, because they are trying to keep their community safe, and their resources are stretched thin. Again, record numbers of smugglers, the traffickers and the gangs. So I think when I had that chance to talk with them I think that's what the vice president needs to hear,” Hinson said.

“We need solutions at the border so we can work on keeping this country safe and secure. When you’re hearing that people on the terrorist watch list got across and were caught, and that's just the ones that were caught. That's definitely concerning to Iowa families. Again, they are having those conversations at their kitchen table every day. It's clear it's not resonating with Vice President Harris, so 83 days. It's time for her to go visit the border,” she added.