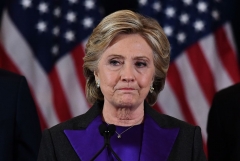 (CNSNews.com) – Former Secretary of State Hillary Clinton warned voters on Wednesday to turn out in droves to vote for the next president so President Donald Trump “can’t sneak or steal his way to victory.”

“Take it from me. So we need numbers overwhelming so Trump can't sneak or steal his way to victory,” she said.

The former first lady said that the morning after the 2016 election, she said, “We owe Donald Trump an open mind and the chance to lead," and Clinton said, “I meant it.”

“Every president deserves that, and Trump came in with so much set up for him: a strong economy, plans for managing crises—including a pandemic,” she said.

She urged people to vote in person early and if voting by mail to “request your ballot now, and send it back right away.”

“As Michelle Obama and Bernie Sanders warned us, if Trump is re-elected, things will get even worse. That’s why we need unity now more than ever,” the former secretary of state said.

“Remember back in 2016 when Trump asked, ‘What do you have to lose?’ Well now we know, our health care, our jobs, our loved ones, our leadership in the world, and even our post office, but let's set our sights higher than getting one man out of the White House,” she said.

“Vote for the parents and teachers struggling to balance their children's education and safety and for health care workers fighting COVID-19 with no help from the White House. Vote for paid family leave and health care for everyone, for Social Security, Medicare, and Planned Parenthood,” Clinton said.

“Vote for DREAMers and their families. Vote for law enforcement purged of racial bias that keeps all our streets safe. Vote for justice for George Floyd, Breonna Taylor, and Ahmaud Arbery, because Black Lives Matter. Vote for honest elections so we, not a foreign adversary, choose our president,” she said.