Herschel Walker: The Left Continues to Lie About Trump, But People of Color Are Starting to Wake Up 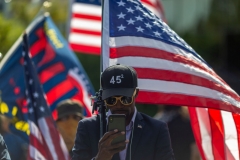 Supporters of President Donald Trump rally to reopen California as the coronavirus pandemic continues to worsen, on May 16, 2020 in Woodland Hills, California. (Photo by David McNew/Getty Images)

“Well, I do think that it's that strong, and what I'm hearing is that people of color are starting to educate themselves and look at the policies rather than just going and voting as your grandparents or your parents voted. They’re starting to look at things that's going to benefit themselves and benefit their community which is very, very important, but what's sad to me is to have people like Chelsea Handler that is trying to put you back and not let you read or educate yourself to see what fits into your community,” he said.

Walker called out comedienne Chelsea Handler for “reminding” her ex-boyfriend rapper 50 Cent that he’s black when he voiced his support for Trump after hearing how Democratic presidential nominee Joe Biden’s tax plan would affect him.

50 Cent said he was leaving New York City after learning that Biden’s plan calls for a 62 percent tax rate for those in his city.

“I had to remind him that he was a black person, so he can’t vote for Donald Trump, and that he shouldn’t be influencing an entire swath of people who may listen to him because he’s worried about his own personal pocketbook,” Handler said.

“Well, it's a racist comment, and it's a comment that I think is very, very silly, and you know, that's when you want to say that something is racist. That's a very racist statement, because he's educated himself something that fits into his agenda, what he's doing. He's talking about taxes, which the Biden administration is not telling the truth when they said they are only going to tax the people that make $400,000, but yet they are going to appeal the Trump tax plan,” Walker said.

“When the people really look at it, they know that's not the truth, and people need to know that. That's one thing that I came out is to see the left continue to lie about President Trump and to see what’s going on. So I think America is starting to wake up. The people of color are starting to wake up, and I think that's what is great for America and that's what's great for this community when you have everybody's waking up to what's going on,” he said.

Walker said the most important thing Trump is focused on is education.

“Well I think one of the most important things he's focusing on is education, creating a better education where you're going to also put jobs back into that community,” Walker said.

“And one of the things I take an example is I have a pastor here, Tony Evans here in Dallas started something called the Urban Development where he put credit unions into these communities and he put jobs and black-owned businesses that they can take care of themselves and the crime went down and that’s what President Trump is talking about empowering this community, not just continuing to give this community something, and I think that's what Ice Cube was talking about just talking the talk without walking the walk, and President Trump has been showing that he's going to do it through the historical black colleges,” he said.

Host Maria Bartiromo said she doesn’t understand why Democrats are against school choice.

“Well, I do understand it. That's the reason they hold the people of color back. They don't want you to educate yourself. Why in the world right now if you start voting for this president they ridicule you. They get on your case because you're educating yourself on policies, and you start educating yourself on policies, and you see the policy the Democratic Party has been delivering is a policy that doesn't work,” Walker said.

“It hasn't been working. Joe Biden has been in his office for 47 years, and I heard a statement the other day that I thought was really, really terrible when I heard someone say, I'm not voting for Joe, but I’m voting for Kamala Harris, and that's terrible,” he said.