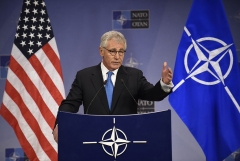 (CNSNews.com) - Former Defense Secretary Chuck Hagel, who served the Obama administration, told ABC’s “This Week with George Stephanopolous” on Sunday that anyone who makes an anonymous comment and feels strongly enough about it to speak to the media should “have the courage to go out and use your name too.”

Hagel’s comment comes after an article in The Atlantic - citing multiple anonymous sources  - claimed that President Donald Trump referred to fallen soldiers as “losers” and “suckers” during a trip to France in 2018 for ceremonies marking the 100th anniversary of the end of World War I.

“Now, I said before, if you want to make an anonymous comment and if you feel so strongly about that that you make that comment to an established, well-respected reporter and a magazine, then you ought to have the courage to go out and use your name, too. I’ve always believed that. I think it’s important now. If these guys who said it or allegedly said it, think it’s that important for the future of this country, then they should show some courage and step forward as well,” Hagel said.

The former Defense secretary said if the comments are real, “it's beneath the dignity of any commander in chief.”

“Truly they're despicable. Now, one of the points that one of the veterans made, which was a good point, these are anonymous sources, but let's go back to the words from Trump himself, coming out of his own mouth, starting in 2016 about what he said about John McCain and what he continued to say about McCain, how he degraded the service of Generals Mattis and McMaster, and just recently, General Kelly, the history of this president over the last three, four years is pretty clear,” he said.

“The 2018 experience when he did not go to the American military cemetery in France, to recognize and honor the World War I Marines, every other leader went. Every other leader drove - leaders of Germany, France, Canada, and you can go through a litany of past things that he said from his mouth, actions that he's taken, and it corroborates really the Goldberg article in ‘The Atlantic’,” Hagel added.

Hagel said he believes Trump’s alleged comments “will resonate” with the military, “because what I’ve just said, he's on the record with saying things himself over the past few years, and that makes the credibility of this article and those anonymous comments more and more credible.”

ABC’s Martha Raddatz said one of the veterans she talked to who didn’t believe the allegations because of anonymous sources said if someone provided the same information on the record in front of a camera, he’s not sure he’d still believe it.

“Well, I think there are those, and I understand this business as you do pretty well, who will never believe it, no matter what is said, no matter who says it, and that's just the reality of politics and freedom of expression, and we have great country where you can believe what you want to believe, but facts are facts, Martha, and the reality of those facts are pretty clear,” Hagel said.

“I think it’s a pretty clear indictment of this president's attitude towards our veterans. He'll use them. Of course, he’s used them in the last three and a half years as props in his actions, in his statements. No president has ever done that -- use your veterans, use your active military as props,” the former defense secretary said.

“I mean, couple of months ago, he sends an airborne division into Washington, camps them outside of Washington - the mayor didn’t ask for that. The police chief didn't ask for that in Washington, D.C., but it's a continuation of the same actions and words we have seen from this president the last three and a half years,” Hagel said.

President Donald Trump has repeatedly denied the allegations in the story. The White House on Friday also said that the article “has been categorically debunked by eyewitnesses and contemporaneous documents.”

White House Press Secretary Kayleigh McEnany said during Friday’s press briefing that within hours of the article’s publication, 10 people “ went on the record debunking these lies -  eight with firsthand knowledge, stating on the record one common truth: that this story is false; it never happened.”

She added two new sources who refute the report to that list: former Deputy Chief of Staff Dan Walsh and Derek Lyons, staff secretary and counselor to the president.

On Sunday, former Chief of Staff John Kelly’s aide also refuted the allegations. Former White House Deputy Chief of Staff Zach Fuentes told Fox News he was in the room for all of the conversations regarding the trip to the Aisne-Marne cemetery, and that he would know what was and wasn't said.

Fuentes told Breitbart that Kelly would not have tolerated such disdain for the armed forces, even from the president.

"Honestly, do you think General Kelly would have stood by and let ANYONE call fallen Marines losers?” he told Breitbart.