Graham: ‘We’re Inviting a Terrorist Attack on Our Country on the 20th Anniversary of 9/11 by Losing Control of the Border’ 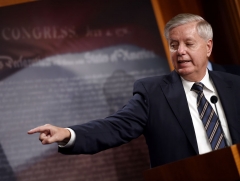 Senator Lindsey Graham (R-SC) speaks during a news conference as the Senate continues to debate the latest Covid-19 relief bill, at the US Capitol in Washington, DC on March 5, 2021. (Photo by OLIVIER DOULIERY/AFP via Getty Images)

(CNSNews.com) – Sen. Lindsey Graham (R-S.C.) told Fox News’s “Hannity” that the Biden administration is “inviting a terrorist attack” on the United States on the 20th anniversary of the 9/11 attacks by not controlling the southern border.

“Let's start with the border. We are inviting a terrorist attack on our country on the 20th anniversary of 9/11 by losing control of the border. How hard is it for a terrorist organization to figure out that you can put terrorists in this flow of illegal immigrants crossing our border? We’re equivocating on standing with Israel. I will be in Charleston, South Carolina tomorrow night rallying Christians and the Israeli community and freedom-loving South Carolinians to stand with Israel," Graham said.

"Two things I’m certain of. Hamas would kill every Israeli if they could. The only reason they are not is ‘cause Israel can defend itself, and Israel could kill tens of Palestinians if they wanted do. They don't. They want to live in peace. They want to live in security, so to my Democrats colleagues who are pushing Israel to stop killing Hamas, degrading Hamas, you’re wrong. Israel, if you’re listening, do what you need to do to protect yourself. This war needs to continue. You continue it. We have your back,” he said.

Graham said the U.S. has “done everything but take an ad out in the paper, come to America.”

“We’re stopping deportations. They’ve basically put ICE out of business. Joe Biden’s overwhelmed by the job of being president. The left has lost its mind. There’s more fentanyl across the border this time in 2021 than in all of 2020. Israel is under the gun – 3500 rockets. Where is it coming from? Iran,” the senator said.

“If you are a conservative person, and you don't vote in 2022, you have nobody to blame but yourself. I miss Donald Trump. None of this would happen if President Trump was president today. I hope he’s considering running. Let’s start a draft Trump movement. He’s the one guy who can go to the America people and say, ‘Let me finish what I started. What I did worked,’” he said.

“I like focus on the agenda. His agenda worked. Conservatism works. Any time those policies are implemented, it works, and I think Putin, Kim Jong-un, the mullahs in Iran and Xi in China, they feared Trump. They don't fear this guy,” Hannity said.

“You got it. They are cleaning our clock, and when trump was the president of the United States, there was a different attitude the world had towards the United States, and I miss that attitude. We are weaker today than we’ve been since Jimmy Carter,” the senator said.