Graham: ‘Is It Plausible the FBI Would Open Up an Investigation of Donald Trump Without Merit? Hell Yeah, They’ve Done It Before’ 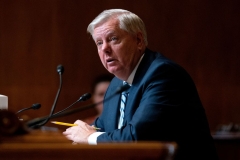 Senator Lindsey Graham (R-S.C.) questions Attorney General Merrick Garland during a Senate Appropriations Subcommittee on Commerce, Justice, Science, and Related Agencies hearing to discuss the fiscal year 2023 budget of the Department of Justice at the Capitol in Washington, DC, on April 26, 2022. (Photo by GREG NASH/POOL/AFP via Getty Images)

(CNSNews.com) – It’s very plausible that the FBI would open an investigation against former President Donald Trump without merit, because they’ve done it before when he was a presidential candidate in Crossfire Hurricane, Sen. Lindsey Graham (R-S.C.) said on Tuesday.

“What we need is the predicate for the warrant because we’re talking 90 days before a midterm election, right? 90 days. We're talking about raiding the home of the former president of the United States, the most likely nominee of anybody on the planet to be running in 2024. Is it plausible the FBI would open up an investigation of Donald Trump without merit? Hell yeah, they have done it before,” he told Fox News’s “Jesse Watters Primetime.”

“So when you hear Axelrod say it's not plausible that Merrick Garland would open up an investigation without significant evidence. Where were you during Crossfire Hurricane when they opened up an investigation on the Republican nominee Donald Trump with a bunch of B.S.?” the senator asked.

“How do you clear all this up? Tell us the predicate for the warrant. Reveal the affidavit. This is too important to democracy. We're in uncharted, dangerous waters. So I'm calling on Merrick Garland tonight to address the nation as to why this happened. Lay your cards out on the table because you are doing a lot of damage to the country,” Graham said.

The senator was referring to former adviser to President Barack Obama David Axelrod tweeting Monday: “One thing is very clear. Garland would not have authorized this raid, and no federal judge would have signed off on it, if there weren't significant evidence to warrant it.

Graham said that every Republican should be calling on Attorney General Merrick Garland to justify the raid on Trump’s private residence at Mar-a-Lago.

“Tell the country why you had to do this, why you couldn't use a subpoena, why it was necessary, and what the hell you are looking for. That's not too much steps. I know normally you don't do that but normally you don't open up investigations on former presidents. Again. Here we go again. I lived through Crossfire Hurricane. I lived through the Mueller investigation,” the senator said.

“The FISA court rebuked the Department of Justice for providing false information to the court to obtain a warrant against Carter Page. Is it plausible the same people would be going after Trump again 90 days before the midterms?” Graham asked.

“So, the pathway for President Trump to become the nominee is much wider now than it was yesterday. The likelihood of him being reelected is greater than it was yesterday, because if you have got something that is really so compelling, you had to go into the man's home with guns drawn to get the information, tell the American people,” he said.

“To every Republican listening to me, we should be clamoring and demanding answers to the questions of why they had to raid President Trump's home 90 days before an election,” the senator added.

Graham said that he can’t “stop the process of normal business in the Senate until we know more” about the raid.

“We're going to have an election in November. You want to stop these people? Fire them. If you want to get a president of the United States that knows what the hell they are doing, pick somebody other than Biden,” the senator said.

“I lived the Mueller investigation. Is it plausible they would open up an investigation against Donald Trump without merit? Hell yes, it's plausible. They have done it once. Had they done it again? There’s one way to answer my question. Tell us what you've got. Show your cards,” he said.