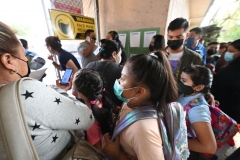 Students and parents arrive masked for the first day of the school year at Grant Elementary School in Los Angeles, California, August 16, 2021. (Photo by ROBYN BECK/AFP via Getty Images)

(CNSNews.com) - Former FDA Commissioner Dr. Scott Gottlieb said Sunday that it’s too soon to get rid of mask mandates in schools like the governor of Virginia has, but he said that parents are willing to tolerate masks in schools if there is an end date to it.

"Look, I think it is too soon to do that because a lot of schools have built their preparations around the use of masks and whatever we want to say about the benefit that masks are providing, it's providing some benefit, and a lot of schools that couldn't implement social distancing couldn't implement testing of relying on masks as their only tool,” he told CBS’s “Face the Nation.”

“So, to withdraw it right at the peak of the epidemic. I think it's imprudent we should wait. I think within two weeks we'll be able to make that decision, but this whole COVID epidemic, I think, has been colored by the fact that policymakers have not prescribed clear endpoints to when they are going to withdraw these measures,” Gottlieb said.

“I think parents are willing to tolerate masks in schools, recognizing it's very disruptive to children if there is an end date to it, if it's clearly prescribed, when we're going to use these masks and when we're going to withdraw them, so they don't disrupt two years of a child's socialization and school activities,” he said.

“So, I think policymakers stepping in and saying, look, we're going to put an end point on this when prevalence declines to a certain level and in sticking to it is very prudent, but to do it in a setting of the peak of this epidemic, I think puts a difficulty on schools that have based their mitigation around the use of masks,” Gottlieb added.

When asked what the benchmark is in his opinion, he said, “Well, the benchmark we prescribed last summer was around 10 cases per 100,000 people per day when we withdraw all mitigation. I think you can lean in and prescribe a higher benchmark when it comes to children in schools because the first thing that we should do is try to withdraw these measures in the school setting.

“If you're going to implement masks among adults in congregate settings in a township, you want to lean in and try to withdraw it in the schools first and try to preserve as much of that environment for learning as you can,” the former FDA commissioner said.

Gottlieb, who is on the board of Pfizer, said that it’s “probably premature” to say that there will be a vaccine for children under five in the next month or so as predicted by Dr. Anthony Fauci, director of the National Institute of Allergy and Infectious Diseases.

Well, I think a month is probably premature to remember the reason why this was extended was because the vaccines in the clinical trial that Pfizer did – I'm on the board of Pfizer as you know. Pfizer tested a low dose in the children.

They tested a number of different doses and chose the lowest possible dose, because at a lower dose, you're going to have less reactogenicity, less vaccine related side effects like fevers and injection site reaction. You want to make sure the vaccine is very tolerable in young kids, but probably because of that low dose, we saw less vaccine effectiveness.

There were more infections in the children who were vaccinated than what we saw in a comparable group of 16 to 25 year olds. So, the decision was made by regulators working with Pfizer to extend that trial to look at a third dose to see if that third dose restored the efficacy in the setting of Omicron, where the vaccines are providing some protection against infection about 50 percent a year.

You're 50 percent less likely to get infected with Omicron if you're fully vaccinated with a booster. The primary utility of the vaccines, nonetheless, is the protection against severe disease hospitalization, and in that regard, getting any vaccine into young kids probably is going to afford them a measure of protection by getting baseline immunity to them.

So, any reconsideration of the vaccine timeline right now by regulators is probably based on that, but I think even if the FDA were to reconsider the approval of the vaccine, you're looking at a timeline when this would get pushed at best, perhaps to into late March, because you'd have to re-adjudicate the data having to add comp to get the vaccine out into the supply chain..

By the time that happens, I think you're looking at a March date, maybe late March. So I don't think this is something that's going to happen in the next month. Right now, Pfizer and the FDA looking very closely at the data that's accrued to see if they can make a decision around this.