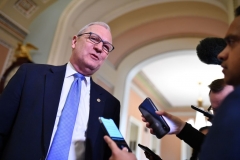 “There is no group of people more negatively impacted by higher energy costs and lower -- fewer energy jobs than the middle class and lower income Americans. So it's very ironic that this president that wants to be a jobs creator and wants equality, would start out by attacking an industry that provides lots of opportunity for every American,” said Cramer, who serves on the Senate Armed Services and Budget Committees.

“One of the reasons North Dakota is second in the country only to Texas in oil production is because we don't have a lot of federal lands, but there's still a fair bit of drilling in the heart of the Bakken in North Dakota that is on federal land, and it will have a major impact on the ability to be energy secure, to create those good middle class American jobs, to be less dependent on foreign oil,” Cramer said.

“So it's a big deal to say the least, and then you have things like the executive order on the Keystone XL pipeline or the removal of the presidential permit. That means we're going to be more dependent on foreign oil, foreign oil from someplace other than Canada. It will have an impact on our relationship with our closest neighbor and biggest trading partner in Canada, and by the way, ironically today as you mentioned he's going to focus his executive orders on equity or equality and economic equality,” he said.

Canceling the Keystone Pipeline cost an estimated 10,000 high-paying union jobs, host Dagen McDowell pointed out, adding that Biden has turned his back on the unions with his decision. She asked what Cramer can do to stop it or reverse some of the damage done to America’s energy independence.

`“It's interesting, Dagen. I was actually a regulator when the original Keystone Pipeline went through North Dakota, and I carried the portfolio that permitted every inch of that pipeline. As a senator, you are somewhat limited. When I was in the House and in the majority, I carried and passed the Keystone permitting bill during the Obama administration,” Cramer said.

“The problem is It couldn't get passed in the Senate. I would think that something similar here could happen but I doubt we could ever pass something that would override the president,” the senator said.

“Therefore, the one thing I intend to do, part of why I voted against Janet Yellen's confirmation last night, we have the opportunity through our advise and consent rule with people that are nominated for confirmation to challenge them on the issues of energy security, energy development, job creation, tax policy, regulatory policy. We have to, I think, hold them to account and not just roll over like a lot of Republicans frankly are in supporting Joe Biden's nominees that are anti-energy, anti-jobs,” he said.

Cramer said that Yellen is “interested in raising taxes on everything.”

"She's a climate activist. She wants to raise taxes on people, middle class Americans. All of these things are bad for our economy and they're certainly bad for energy development in our country,” the senator said.

McDowell noted that Biden’s policy will hurt blue states like New Mexico, which gets 20 percent of its budget from mineral royalties shared by the federal government. She said if there’s financial damage to blue states, there might be pushback against what the Biden administration is doing.

“Well, so there are a number of states. New Mexico is chief among them, of course, which is a large federal land state, as you said, has a lot of oil and gas opportunity and potential and activity and now you have New Mexico Democrats up in arms over or at least challenging the president's decision to do this,” Cramer said.

“Well, they should have been a little more active and certainly the voters could have been more active prior to electing another Democratic senator from New Mexico, but there is hope when you have that kind of a pushback. You also have people like Joe Manchin who comes from not so much an oil state but gas and certainly coal in West Virginia,” the senator said.

“You know, there needs to be a bipartisan effort to at least sound the warning alarms. Remember this too, Dagen. This president wants to spend a lot of money. Taking revenue away from the federal government certainly is manifest in stopping drilling on federal lands. Those are federal resources,” Cramer said.

“Those resources generate revenue that will otherwise have to be filled either by borrowing or other tax increases, other places, on top of that in the case, again, going back to Janet Yellen, she advocates for a $40 a ton carbon tax. So that raises the cost of everything that we produce, everything we develop, everything we grow, everything we manufacture in this country. And it starts with a $40 a ton tax on energy development,” he said.