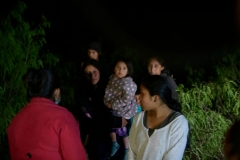 A group of central American immigrants arriving illegally from Mexico to seek asylum rest after disembarking from an inflatable boat on the US bank of the Rio Grande river before turning themselves in to border patrol agents, at the border city of Roma on March 28, 2021. (Photo by ED JONES/AFP via Getty Images)

(CNSNews.com) – Rep. Victoria Spartz (R-Ind.) pointed out that as a mother in America, if she had sent her teenage daughter across the border to let them sit in overcrowded Border Patrol facilities, she would be in jail.

Speaking to reporters during a congressional visit in Mission, Texas, Sparks said it was her second trip to the border in the past few weeks.

“I can tell perverse incentive and lack of leadership from this administration creates a real serious crisis at the border. It's really escalated. There's a lot of discussion if it's a crisis or not. Let's talk about some numbers. Forty percent of our Border Patrol agents are busy processing people and changing diapers. It means that they cannot do their job protecting the borders. What does this mean? It means that Mexican cartels are controlling the border,” she said.

“It means that we have a thousand people just at this location per day crossing the border that they see them on the video, but they cannot act to that. It means that they’re so overwhelmed that they have to release 12,000 families, 12,000 people in the country without going through processes that has to happen. Is it not a crisis?” the congresswoman asked.

“We saw terrorists crossing recently. This is a national security and humanitarian crisis. Let's look at other numbers. We have cartels making half a billion dollars in a month on human trafficking and making these people into slaves. We have a situation that is six times increase in drug smuggling. That is not a crisis?” Spartz said.

“We have a situation where parents send six- and eight-year-old kids to cross the border. These kids are crying, because we created perverse incentives. If I would be sending my two teenage daughters through the border and also let them to sit in pods they have instead of 33 people, have over 500 people, I would be in jail as an American mother,” she added.

“So that is not a crisis? This is crisis, not a Texas crisis. This crisis is coming to Indiana and all other states because we don't have a border from Texas,” the congresswoman said.

Spartz pointed out that America cannot take care of homeless veterans, yet the administration is “spending over $800 per day housing some of these families in hotels.”

“This administration says, you know, this is not a change of policy? They’re either naive or incompetent because there has been change in policy. I’ll just tell you what about the solutions. The long-term solution is that we have to have good legal immigration system and legal infrastructure, but there are also some short-term solutions that needs to happen,” the congresswoman said.

“They need to send HHS to help them and have the proper tools and finances for them because after Section 42 goes away, we're really in trouble. Hopefully, you can have this conversation, and we’re going to talk to our Democrat and Republican colleagues and to this administration because it is not acceptable,” the congresswoman added.