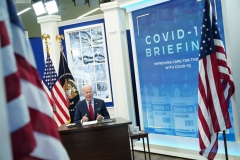 President Joe Biden meets with members of the White House Covid-19 Response Team on the latest developments related to the Omicron variant, on January 4, 2022, in the South Court Auditorium of the White House in Washington, DC. (Photo by MANDEL NGAN/AFP via Getty Images)

CNSNews.com) - Rep. Jason Smith (R-Mo.) said Tuesday that he sent the Biden administration dozens of letters asking for them to account for the $6 trillion in COVID relief money that has been spent, but has had no response.

“Crickets,” Smith told Fox Business’s “Mornings with Maria” was the response from the administration. “We have sent 35 letters to the administration asking for accounting of the roughly $6 trillion of COVID money that's been spent and it's been crickets, but what we have discovered is not any good.

“The $2 trillion that was spent back in March, the package that they said that was for COVID relief, you know Maria, less than nine percent actually went towards COVID spending and COVID relief, but that other 91%. It went to crazy items, $2 million to plant trees in Syracuse or $4 million for a parking lot in South Carolina, $1,400 to Japanese citizens in Japan, checks to prisoners, $16 million for a golf course in Palm Beach,” he said.

“It's ridiculous, but what Biden did do out of $2 billion that was appropriated that was supposed to go towards COVID testing and to replenish the strategic stockpile, he sent that to the border to house illegal immigrants. It's absolutely reckless what this administration is doing, Maria,” the congressman said.

In March, you used a partisan process to push through Congress via one party Public Law 117-2, the American Rescue Plan Act (ARPA). You marketed it to the American people as a bill to combat COVID-19, when in reality less than 9 percent of that bill actually went to public health spending to fight the virus.

And over the summer your Administration repurposed billions of dollars of that 9 percent – including $850 million meant to develop domestic COVID-19 testing capabilities – to deal with housing illegal immigrants at the southern border as a result of the historic border crisis manifested under your watch.

You can understand the frustration on the part of Americans as they realize that funds meant to go to testing capabilities were instead used by your White House to reward illegal immigrants.

Of the other 91 percent of the spending in ARPA – a bill supposedly about COVID-19 – rampant examples of misuse and waste continue to pile up. Hundreds of billions of dollars have been used to bail out state governments, and to build bike trails, new high school weight rooms, apartment buildings, and golf courses, to name just a few examples. Simply put, this Administration's first request to Congress for COVID-19 dollars resulted in multiple, easily predicted instances of non-COVID related spending.4 What's worse, when asked to account for these taxpayer dollars or answer questions about their use, your Administration has remained silent.

Smith cited the following as examples of waste and abuse of COVID funding:

The state of New York’s budget included a $2.1 billion fund for direct checks to illegal immigrants—suspiciously the exact amount of additional federal dollars they received from ARPA.

On April 15, 2021, it was reported the Governor of New Jersey was considering using ARPA dollars to create a $40 million fund for the state’s 460,000 illegal immigrants.

The city of Chicago decided to spend $31 million to create a guaranteed income program in Chicago13 and the city of Philadelphia planned to test a universal basic income pilot program with $18 million from ARPA.

Thousands of convicted inmates in Michigan were sent $3,200 stimulus checks, paid for by ARPA.

New parking lots and bathrooms have been planned at a South Carolina beach—the $4 million price tag covered by ARPA.