Giuliani: The Only One Who Got Money from Communists Is Joe Biden 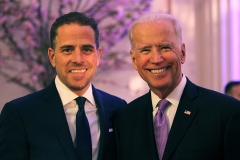 (CNSNews.com) – President Donald Trump’s lawyer, former New York City Mayor Rudy Giuliani said Monday that despite what Democrats have alleged, the only person getting money from communists is former Vice President Joe Biden through his son Hunter Biden, who received $3.5 million from a Russian oligarch.

“As far as I can see, the only one here that has gotten money from the communists is Joe Biden. The only big money that anybody's made here is Joe Biden from the communists in Russia. That 3.5 is backed up by an invoice, by the way. He completely lied. Of course, Chris Wallace didn't call him on that. He contradicted the president twice. I mean, all you have to do is read the report. There is a memo, an invoice showing it,” Giuliani said.

According to a report by the Senate Homeland Security and Governmental Affairs, Hunter Biden received millions from Russian oligarch Yelena Baturina.

In an interview with Fox Business’ “Mornings with Maria Bartiromo,” Giuliani was asked to react to Rep. Devin Nunes’ (R-Calif.) comments about the declassification of information showing that former Secretary of State Hillary Clinton approved a plan to tie Trump to Russia in 2016 and the FBI never released that information to lawmakers.

There's a lot more the FBI hasn't released - I can tell you that - and hasn't investigated. I don't know what happened to it under Comey. I don't know how deep it goes. I don't think it goes down to the field level, but it's more extensive than just a few dirty agents. I mean, the reality is that they first tried to prevent him by illegal means from becoming president. Then they tried to prevent a coup.

A bunch of them I had to knock aside, but you can't believe it and I can't believe the media. I am totally shocked how they don't cover things that relate to national security. You know, Ron Johnson put out the report last week. He's got a whole section that you were talking about the CCP, how the CCP bought the Biden family. Millions of dollars from the CCP members to the Biden family, and we’re going to fight China with Biden? They own him.

If he's trying to do anything to him, they'll sue him, try to get their money back. You can't imagine the amount of money that went to the Biden family with Joe right there, flying his son there. You can't imagine how often his son misused Air Force Two to make money. And his son has been a drug addict for a good deal of the 10 years. Nobody's paying him $10 million. They're paying for Joe. You have to be stupid to think they're doing it.