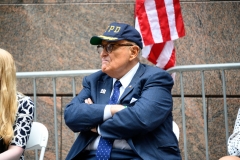 “I hope Biden says a big, big tax hike is going to stimulate the economy. I mean, that debate should have been over. Kennedy cut taxes. Reagan cut taxes. Trump cut taxes. In each case, economic boom took place almost within six months. That was going on when the pandemic happened. So -- and we're getting out of the pandemic economy faster than anybody thought. I'd say three times, four times, what any of the experts say,” he told Fox Business’ “Mornings with Maria Bartiromo.”

“We're at 8 to 9% unemployment, not the 15 to 20 they were predicting. We're growing jobs per month at three or four times what the Democrats were hoping and predicting. I mean, in some areas, we’re 75% of the way back, some areas 50% of the way back, and Democrats are deliberately keeping states closed and won't let schools open in places where there's no reason for it,” Giuliani said.

“You know they're doing it in order to depress the economy, and it's not working. The economy couldn't have made more progress in the last three or four months. It couldn't have. It would have been humanly impossible. He happens to have a talent for stimulating our economy. You're not going to change in the middle, not only change, but change for an approach that's insane. It would be insane to take half that amount of money out of the economy. Half,” he said.

Host Maria Bartiromo said she can’t believe “this is what Joe Biden is campaigning on.”

“He's campaigning on raising taxes by $4 trillion in an economy where we saw 30 plus contraction in the second quarter. Wow!” she said.

“Rudy, some people feel that the whole law and order issue is going to come back to bite Joe Biden. Remember, we had protesters, looters, rioters on the streets, and you didn't hear a word from the Democrats. Joe Biden did not have a peep, and now we've got New York Governor Andrew Cuomo's parole board voting to free a cop killer. Anthony Bottom was convicted of killing two NYPD officers in the 1971 ambush. Bottom has spent more than four decades behind bars, but now he's getting out,” Bartiromo said.

Bottom, Herman Bell and Albert Washington - members of the Black Revolutionary Army - were convicted of luring Officers Joseph Piagentini and Waverly Jones to a housing project in Harlem with a bogus 911 call and assassinating them.

Bottom was sentenced to 43 years behind bars for his role in their murders. Bell was released on parole in April 2018 after spending 40 years in prison, and Washington died of liver cancer in prison in 2000.

“That would be good for Kamala and Joe, because then they wouldn't have to put up bail money for the rioters that get arrested, you know the black lives matter people who are dedicated to killing police officers. Their staffs raised money to get those rioters out of jail so they could go riot again, and the press doesn't cover it. That's outrageous to do that,” Giuliani said.

“Also, Biden is going to try to say crime went up under Trump. Crime doesn't go up or down under a president. Mayors and governors are responsible for law enforcement. We don't have a federal police force. Nobody ever blamed President Clinton for crime when I was mayor and nobody really praised him when it went down, because he didn't bring it down. He couldn't,” the former mayor said.

“The reason there's so much crime in New York is what you're talking about. This guy, Bottom, was released based on new guidelines that Cuomo put into effect. In other words, this is done to help criminals. It's the help criminal program. In the last month, he's done two more like this,” he said.

“He paroled a man named [Sam] Ayala who also served 43 years in prison, interestingly, for a double rape murder. He's considered a dangerous sex offender. You don't get over being a dangerous sex offender, Cuomo. You don't get over it. He paroled another guy that killed a parole officer. That guy did it in cold blood. He lured the parole officer into a room and put bullets in his brain,” Giuliani said.

“They see the effect this is having on the streets of New York. Why? Why do they do this?” Bartiromo asked.

“They put deviant sex offenders on the streets, Maria in that stupid home they had in the west side of Manhattan that Curtis Sliwa got closed. They had sex offenders in there, next to children. It was right near a school. I don't know what's wrong with them. The reason crime is going up -- I think the president has to make it clear this is on the shoulders of Democrat policies, it's happening in Democrat cities and states, not in Republican cities and states,” Giuliani said.