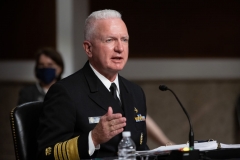 Assistant HHS Secretary for Health Brett Giroir testifies during a US Senate Senate Health, Education, Labor, and Pensions Committee hearing to examine Covid-19, focusing on an update on the federal response in Washington, DC, on September 23, 2020. (Photo by GRAEME JENNINGS/POOL/AFP via Getty Images)

(CNSNews.com) - Adm. Brett Giroir, assistant secretary for health at the Department of Health and Human Services, told Fox Business’s “Mornings with Maria Bartiromo” on Thursday that he can say “with a high degree of certainty” that by June anyone who wants a COVID-19 vaccine can get one.

“That really is, with a high degree of certainty that by June anyone in this country who wants a vaccine could have a vaccine. We do expect 20 million people immunized this month, 30 million people in January, and then another 50 million doses in February. Some of those will be first time recipients,” Giroir said.

“Some of those will be getting their second dose, and it will go up from there dramatically. So we are absolutely on schedule, and it’s very exciting. We have work to do right now, but the end of the pandemic is in sight. It really is, and it’s going to be mid next year,” he said.

Giroir said he’s optimistic that the Moderna vaccine will receive emergency use authorization from the Food and Drug Administration.

“It also works in the elderly, so it works across the age spectrum, and the side effects are very mild, every similar to what we saw with Pfizer. It just means your immune system’s working - sore arms, a little bit of fatigue,” Giroir said.

“What it means is if it’s authorized, and I’m confident it will be, that in addition to two million Pfizer doses being shipped next week, we anticipate 5.9 million doses of Moderna, so almost 8 million next week on top of the 2.9 million this week,” he said.

When asked about reports of people who took the vaccine having an allergic reaction, Giroir said, “The only report that we have right now, of a serious side effect, was one of these allergic reactions. Now in the United Kingdom they occurred in people who were sort of hyperallergic at baseline.

“This was a young health care worker who did not have that type of history, and she had an allergic reaction, and if you do numbers, this is probably going to be in the range of one in 500,000, to one in a million, which is what you can expect,” he said.

“Now she was treated immediately with the appropriate anti-allergy medicines - epinephrine and Benadryl - and is absolutely fine. She is really a trooper. If you heard her, she encourages everyone to get vaccinated and is not happy that she can't get her second dose, so we are going to see the one in 500,000, one in a million kind of allergic reactions. That’s why we want to make sure that even in those circumstances there’s the appropriate medications to treat it,” Giroir added.

When asked what has struck him most about the rollout, Giroir said, “There are so many things that are important. This is an historic time because we are seeing the end of the pandemic is in sight. We are really doing two things at the same time.

“Number one, trying to get herd immunity by vaccinations and that will happen when 70, or 80% of the American public is either vaccinated or have had the actual virus but what we're doing right now is very important, because we’re vaccinating for real immediate impact, by vaccinating our elderly population particularly those in nursing homes, assisted living. That’s where a large minority of the deaths are. Those are the people who go to the hospital for long stays,” he said.

“So although we won’t achieve sort of the end of the pandemic. We’re going to see the burden on hospitals and on mortality rate going down, significantly over the next couple of months, so I am excited about that, and I feel for all my frontline workers. I’m an intensive care physician for children, and they have just been heroic during this entire time, and they need some relief, and relief is coming for them and that’s good news for all America,” Grior said.

Grior admitted that children are susceptible to the virus, “but they have much, much less chance of getting any severe consequences than adults."

“I mean it’s very, very small, and I do want to make the point that we are getting more and more information that schools are safe. Even this week, there was a new CDC publication that said that, you know, the rates of positivity in children are not associated with them going to school,” he said.