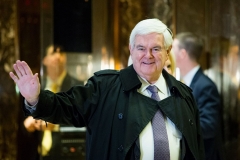 Former Speaker of the House, Newt Gingrich, arrives at Trump Tower on another day of meetings scheduled with President-elect Donald Trump on November 21, 2016 in New York. (Photo by EDUARDO MUNOZ ALVAREZ/AFP via Getty Images)

(CNSNews.com) – Former House Speaker Newt Gingrich told Fox Business’ “Mornings with Maria Bartiromo” on Wednesday that it’s “ironic” that former President Bill Clinton promised in Tuesday night’s speech at the Democratic National Convention that former Vice President Joe Biden would go to work for America when “we can barely get him out of the basement.”

When asked for his thoughts about the first two days of the convention, Gingrich noted that viewership was down about 30 percent, and he predicted it will worsen, because “a virtual convention is fairly boring.”

“First of all, I think it's ironic that Bill Clinton is promising us a president who will go to work when we can barely get Biden out of the basement, so he’s certainly not behaving like somebody eager to go to work. Second, I think the most important characteristic is the collapse of the viewership. They’re down I think 25 or 30%, and my guess is it's just going to keep getting worse, because it turns out that a virtual convention is fairly boring and that frankly there are not that many people excited by Joe Biden,” Gingrich said.

“I think that the Democrats have not yet come to grips with the reality that they may have picked ticket with Biden and Harris that has no popular appeal. It’s only battle cry is to defeat Trump and people just, I think, are going to find very, very low turnout on the Democratic side this fall, and you're seeing that not just at Fox News, but across the board, every single network has had a substantial drop in the number of people compared to 2016,” he said.

During Tuesday night’s convention, Secretary of State Colin Powell’s support for Biden saying, “I support Joe Biden because beginning on day one he will restore America's leadership and our moral authority. He’ll be a president that knows America is strongest when as he has said, we lead both by the power of our example and the example of our power.”

“I think Trump is a very disruptive president who has profoundly changed American policies and I think if you're part of the traditional foreign policy establishment as Secretary Powell is, you find this very difficult because this is, in fact, a repudiation of 18 years of fighting in Afghanistan without victory,” Gingrich said.

“It’s a repudiation of how many young Americans have died and been severely wounded without victory in Iraq and elsewhere, and it's a very different approach, a much tougher approach, so I think that that explains the sort of nationalist policy establishment,” he said.

As far as former Ohio Gov. John Kasich’s support for Biden, Gingrich said it diminished him more than it helped Biden.

“I think Kasich is just sad. Kasich was a great contributor to getting balanced budget. He was a good governor of Ohio but he got very bitter when he suddenly discovered that voters didn't hold him in the same esteem that he held himself. He’s sort of in the Bill Kristol wing of you don’t love me, so I’m going to hate you, and I thought having Kasich on actually probably reduced Kasich’s standing more than it helped Biden,” Gingrich said.

“For the first two days of the DEMOCRAT National Convention, President @realDonaldTrump has traveled... to 4 states, 6,596 MILES,” she tweeted. “Sleepy @JoeBiden has traversed... an undisclosed number of STEPS through his basement. We’re wondering if Joe got 6,596 steps in today.