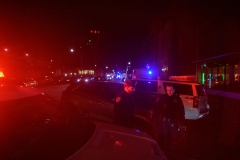 Police officers stand at a cordon before the scene of a shooting in Harlem, New York on January 22, 2022. (Photo by ED JONES/AFP via Getty Images)

(CNSNews.com) – Fraternal Order of Police National Vice President Joe Gamaldi said Tuesday that it’s “interesting” that all of a sudden the Biden administration wants to pay attention the violent crime affecting major U.S. cities when on the campaign trail they wanted to divert police funding.

“Well, it's certainly interesting now all of a sudden we want to pay attention to the violent crime ravaging our communities, because when the Biden-Harris campaign was on the campaign trail they said they actually wanted to divert funding away from police departments and into other programs. So what changed?” he asked.

“I guess when you have an approval rating in the 30% range, when you have 15 American cities having their highest ever recorded murder rate, and you are actually seeing police officers shot at historic amounts - 346 last year. I guess it was time to change tune and pay attention to what's going on in this country. So here is an idea,” Gamaldi told Fox News’s “America Reports.”

“Let's start getting grant funding for local police headquarters so we can deal with our horrific retention and retirement problem. Let's boisterously support the Protect and Serve Act that makes it a federal crime to assault police officers, and imagine this, the leader of our country, boisterously supporting law enforcement and stop demonizing us,” he said.

“How far would that go, or rebuking rogue prosecutors who are letting people out who are committing gun crimes over and over again. You want to talk about gun laws. Let’s stop giving them a bond every time they shoot someone. That's how we enact real change in this country and President Biden needs to be leading from the front,” Gamaldi added.

Bratton has said that the criminal justice system in New York City and throughout the state is not structured to go after those using guns to commit violence.
“It’s funny John. We know what reduces crime, because the American police officer delivered historic crime reductions the prior 20 years to this huge spike we saw. We have to embrace the rule of law,” Gamaldi said.

“We need to vehemently prosecute violent crimes, and we need to embrace broken windows, and to Commissioner Bratton's point, when they were stopping people for turnstile jumping in the subways, they were catching someone with an illegal firearm one of every 20 times, but you know at this point, even if we had every police officer in Manhattan making these types of arrests, who knows what this D.A. is going to do,” the FOP national vice president said.

“He already put out a memo that said, don't worry if you rob someone, if you did not hurt them with the gun or knife we’re going to make sure we downgrade that charge. How could anyone in their right mind advocate this when we see shootings up 102% in New York? We just had a police officer murdered the other day and this guy’s out here saying he’s got to be light on crime. It's a complete joke,” Gamaldi said.

He said that violent crime can be reduced “if we embrace our broken windows theory.”

“We can absolutely reduce violent crime in our urban communities if we embrace our broken windows theory, if we’re getting the criminals off the street, but we are only one component. Law enforcement is only one component of our criminal justice system,” Gamaldi said.

“We need to make sure that these violent criminals are getting high bond amounts so they can’t get out over and over again, If they’re out on eight felony bonds, they don't get a ninth one, and we need to make sure that the district attorneys, the rogue D.A.’s in the urban communities, do your job. Prosecute these violent criminals to the fullest extent of the law,” he said.