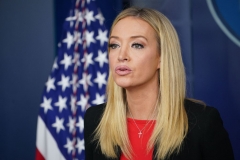 White House Press Secretary Kayleigh McEnany speaks during a briefing in the Brady Briefing Room of the White House in Washington, DC on January 7, 2021. (Photo by MANDEL NGAN/AFP via Getty Images)

(CNSNews.com) – President Joe Biden is using the voting rights issue, which polled at one percent as the issue of interest to voters in the November Gallup poll, to distract from his failing agenda, Kayleigh McEnany, former White House Press Secretary for the Trump administration, told “Fox News Primetime” on Tuesday.

Host Rachel Campos-Duffy said that more people voted after voting rights bill SB 202 was passed in Georgia than before.

“That's exactly right. You are referring to the municipal elections in 2021. More people voted after than before. Not only that, "The Atlanta journal constitution," the big paper there in Atlanta said that there were no long lines, that it essentially went flawless. But, of course you have the president going down and gaslighting, saying this is Jim Crow 2.0,” McEnany said.

“He’s been fact checked on this but taking a bird's eye view as to what happened today in the speech, Rachel it, boils down to this. When you look at issues 1, 2, and 3 in interest of priority to voters and any polling, you see the economy, you see COVID, you see immigration,” she said.

“When you think of Biden's name in juxtaposition to those issues, you think of crisis, crisis, crisis, inflation, COVID rampant, immigration, border on fire. So what he has done is pivoted to an issue, voting, that has an asterisk by it in the Gallup November poll, because it is so significantly insignificant in the issues of interest to voters that it doesn't even register at 1%,” McEnany said.

“So he’s pivoted to this issue and called anyone who opposes him racist. That is the playbook. It's an act of desperation. Desperate times call for desperate measures. Indeed, the Biden administration is desperate now a few months ahead of the November elections here in 2022,” she said.

Karl Rove, former deputy chief of staff for George W. Bush, said the Biden administration is pushing for passage Democratic voting rights legislation because they want to rally the Democratic base even though they know neither of the bills will pass.

“They want to demonstrate that they're pushing hard for it so they keep enthusiasm in the African-American community up. The other thing though is listen to the speech itself today. I mean, first of all, we had January 6th, and January 6th was a stain on our country, but there is not a single thing in either one of these two proposed laws that has anything to do with January 6th,” Rove said.

“There are enough tools on the -- available to the federal government to deal with the people who broke into the Capitol and assaulted 140 police officers. Neither John Lewis Act or the Freedom to Vote Act have anything to do with January 6th, and second of all, look at what they're complaining about in places like Georgia and Texas where the federal government has stepped up and filed lawsuits against these bills,” he said.

“Number one in the Georgia lawsuit is they object that the Georgia law does not allow local units of government to mass mail out applications for absentee ballot, and this is supposedly -- you know Jim Crow 2.0. Well, look all the states in the union that have similar practices where you have to apply for an absentee ballot. You don't get sent a request for it automatically like the state of New York, like the state of Delaware. Are those two states Jim Crow 2.0?” Rove asked.

“So this is about trying to prove a point in order to energize people for the November election. There’s no chance of passing either one of these bills. There are only 48 members of the Senate at most who are in favor of changing the rules. So the majority ought to rule, and the majority is 52,” he added.

As CNSNews.com previously reported, Democratic gubernational candidate Stacey Abrams did not attend Biden’s speech on voting rights in Atlanta on Tuesday, because of a scheduling conflict, according to Biden.

“That scheduling issue as one of my former colleagues put it is the election. It is the popularity of Joe Biden in the state of Georgia which hovers around 30%, and I’m probably being generous there. If the president of the United States, the commander-in-chief is coming to your state, you are a political figure, and you know it would be a massive embarrassment to him if you are not there,” McEnany said.