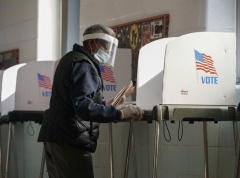 A poll worker cleans a voting booth between voters as residents of Baltimore City cast their votes in the U.S. Presidential and local congressional elections at Western High School on November 03, 2020 in Baltimore, Maryland. (Photo by J. Countess/Getty Images)

(CNSNews.com) – H.R. 1, the For the People Act, might make it easier to vote, but it also makes it easier to cheat, Former White House Deputy Chief of Staff Karl Rove said Thursday.

“The voter ID thing is very troubling, because who wants to get rid of the requirement that you show who you are when you go show up to vote? The Democrats make this a big deal, because they say this suppresses the vote, but what it really does is it makes it -- voter I.D. makes it harder to cheat. We ought to have election laws that make it easier to vote, easier to register but harder to cheat, and this bill strikes at – it certainly makes it easier to vote but it also makes it much easier to cheat,” Rove told “Fox News Primetime.”

You touched on the first one - the use of your tax dollars, taxpayer financing. You give $200 to your candidate. They get a six-to-one match by the federal government, but that's not the end of it. They’ve also got a test in three states in which they will mail every voter a $25 voucher that they can send to a candidate of their choice and that candidate can then turn it in for a matching 25 bucks from the federal government. Pretty amazing.

I suspect if they test it, we all know what is going to happen to that test. It's going to be declared a success and make that soon go to everybody in America so they can give $25 of your taxpayer dollar to whoever they want, but that's not all the bill has in it that is bad, Lawrence.

There’s partisan control. They forbid the legislatures from drawing district lines and instead in every single state, turn it over to an unelected unaccountable committee to draw the borders for state legislative districts and congressional districts. It may be unconstitutional. They have the party that controls the White House controls the federal election commission.

Today if you want to prosecute somebody, the Democrat and Republican commissioners, at least one Democrat has to agree with the Republicans or one Republican with the Democrats before a prosecution can go forward. Then all groups must disclose their donors if they get involved in politics.

Even if they spend a fraction of their total money on politics, they have to disclose the donors, and the irony is, is that the Supreme Court in a case called Alabama versus the NAACP said that such groups, 501(C)(4) groups like the NAACP did not have to disclose their donors in 1954 when the racist attorney generals were trying to see who was giving money to the NAACP. So it's really ironic that we’ve come to that place.

Finally, federal takeover of elections, outlaws voter ID You'll have to have an ID if you want to cash a check, get on an airplane, but by God, if you’re gonna vote, you can't have it. They have to have a requirement of voter ID. It restores voting rights for felons whether your state wants to or not, automatic voter registration starting at the age of 16, online same-day registration, expands mail-in and early voting whether your state wants to do it or not and it legalizes ballot harvesting, which is illegal today in many, many states.

That's where somebody can come and get a ballot from you around turn it in for you, which has been misused in state after state. We had a terrible scandal here where people were harvesting ballots from people that were disabled. Finally, it limits the removal of names of dead, moved or non-voters from voter registration rolls. That's the start of bad things in the bill.

Rove said there are parts of HR 1 that are unconstitutional.

“There is a clause in the Constitution that says that states are in charge of setting the time and manner and method of the election, but it also allows the federal government to sort of set some certain things like a uniform voting date - the first Tuesday after the first Monday in November, but there are elements like redistricting where the legislature is in charge,” he said.

“And I think that is definitely unconstitutional, but it is a power grab in my opinion so that the federal government will determine how states want to do it, and look, the method of voting in Alaska ought to be left up to the people in Alaska, which is different than the method of voting in Texas or Florida or New York or California. Texas, we have very—lots of people, more than half of our vote is cast early. A lot of people use mail-in ballots. That ought to be up to the people of Texas through their legislature to decided not to have it dictated by Washington,” Rove added.