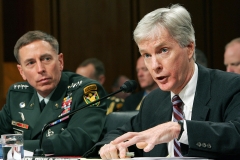 US Commander in Iraq General David Petraeus (L) and US Ambassador to Iraq Ryan Crocker (R) testify before the Senate Foreign Relations Committee on the state of the Iraq war 11 September, 2007 on Capitol Hill in Washington, DC. (Photo by TIM SLOAN/AFP via Getty Images)

(CNSNews.com) - Former U.S. Ambassador to Afghanistan Ryan Crocker, who served during the Obama administration, blamed former President Donald Trump for creating the scenario unfolding in Afghanistan by engaging in talks with the Taliban without having the Afghan government in the room, but Crocker said Biden “owns it,” and the execution of U.S. troop withdrawal “does not speak to competency.”

When asked to explain remarks he said last week about having “grave concerns” about President Joe Biden’s capacity to lead, Crocker said, “What I meant by that, Major, is the way not only how his decision was made to withdraw, but then its execution, which has been so far catastrophic.

“You know we've got desperate people, American citizens, other Afghans we've helped, you name it, doing anything they can to-- to get out of Kabul, and we will all remember those horrible images of Afghans who had clung to a wheel well on a C17 dropping out of the sky to their deaths. So the execute-- the decision and the execution and the execution, in particular, does not speak to competency,” he said.

“And when you talk about capacity, are you saying anything else outside of what you just articulated, meaning execution and decisions?” host Major Garrett asked.

“Well, Major, we've got to be-- we've got to be fair here and-- and a little bit honest with ourselves. President Biden didn't create this whole scenario. President Trump did by engaging the Taliban in talks without the Afghan government in the room. That began a process of delegitimization of the state and its security forces,” Crocker said.

Crocker said he’s “afraid that as the Taliban gains more control, as they settle in a bit more, they are going to go after all of those in Afghanistan who have spoken the truth, who have been in the media, who have represented the institutions of this young democracy and certainly those who have helped us directly like the interpreters.”

“I'm very much afraid that this is going to get worse. The chaos may subside, but, as it does, I am terribly worried you're going to see the Taliban start to methodically take care of those they consider their enemies. We will be in no position to help them,” the former ambassador said.