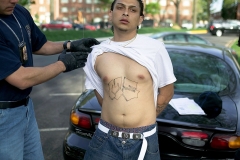 (CNSNews.com) - President Joe Biden’s guidance on illegal immigration amounts to the “largest jailbreak in American history,” because it requires illegal immigrants who would normally be jailed and deported for certain crimes to be released back into the country, former Trump Senior Policy Adviser Stephen Miller said Wednesday.

“I unfortunately have very bad news for your audience, which is that the administration and through DHS and ICE has issued new guidance, which is effectively a backdoor moratorium on most deportations. They issued guidance recently to try to effectively gut ICE notwithstanding the injunction to say the vast majority of criminal aliens can't be removed from this country,” Miller said in an interview with Fox Business’s “Mornings with Maria Bartiromo.”

“They made clear, for example, that if you are a gang member, and you are caught by ICE, that you can't be removed from the country absent an extremely difficult test to pass, involving very specific prior criminal history. Under our administration, we deported 20,000 gang members. Virtually all of them under these rules would have been allowed to stay in the country. Under the new system that they’ve just put into place you can't deport somebody for overstaying a visa,” he said.

“The vast majority, the overwhelming majority of criminal aliens are now going to be set free back into our communities, and so the next phase of these lawsuits has to be to enjoin this guidance, which will be the largest jailbreak in American history. It is happening right now,” he said.

Bartiromo noted that Vice President Kamala Harris, when she served in the Senate, called for instituting cashless bail all across the country, and in places like New York where cash bail was removed, violent crime like shootings and murder has gone up by double digits.

“This is madness Maria, and I just hope that the American people understand. This is not hyperbole. This is happening right now, and innocent law-abiding people are getting hurt,” Miller added.