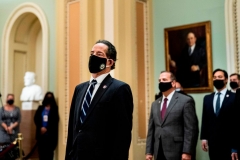 (CNSNews.com) - Former Trump impeachment lawyer Robert Ray said Thursday that House impeachment managers made a good case for impeachment on Wednesday, but on Thursday, they “drifted far away” from the incitement charge.

“I think they made a good case yesterday,” Ray, who served on President Donald Trump’s defense team for his first impeachment trial, told Fox News’s “America Reports” when asked to assess the performance of House Democrats.

“My reaction to today with the presentation of a litany of Democratic grievances, and yes, I understand as Chris Wallace just pointed out, it’s a political proceeding, not a legal one, but they drifted far away I think from the incitement charge, which is an article of impeachment, which they in good faith the senators have to find was committed as a high crime or misdemeanor in order to justify a vote for conviction to reach the remedy that the Democratic Party is anxious to gain, which is to prevent Donald Trump from running for federal office and in particular for president in 2024, and I think that all of this resort to talking about Charlottesville and talking about Governor Whitmer in Michigan, seemed to drift very far afield,” he said.

“Yesterday's presentation was tight and I think was largely to the point here. Today, I think they drifted pretty far away, which is another way of saying I think they've opened the door to an awful lot which will be presented tomorrow, essentially in response to be careful what you ask for, you might get it,” Ray said.

“You are going to hear an awful lot I think about Black Lives Matter protests over the summer and what happened in Portland and Seattle Washington and other places around the country where federal buildings were occupied and vandalized and so on and so forth,” Trump’s former attorney said.

“I think the best offense here is that it is not -- what was done, well reprehensible, was not the crime of incitement and insurrection because they cannot prove that president trump made a direct call for a violent or lawless action, and failing that, you can't prove an impeachable offense,” Ray said.

“Yes, I understand that senators can vote however they like, but if you are grounded in what that -- the practice of precedent is with regards to how impeachment should be viewed, that is what you have to show. I think we will see a lot more tomorrow from the Republicans defending on that basis. There is not a violation of the crime of incitement,” he said.