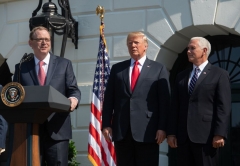 Kevin Hassett, Chair of the Council of Economic Advisers, speaks about the economy as US President Donald Trump (C) and Vice President Mike Pence (R) look on at the White House in Washington, DC, on July 27, 2018. (Photo by NICHOLAS KAMM/AFP via Getty Images)

(CNSNews.com) - Kevin Hassett, former economic council of advisers chairman for the Trump administration, said Wednesday that the way President Joe Biden is handling the economy is “econocide,” and he predicted that inflation could be worse than it was in the 1970s.

“Everybody is telling you that there are all these problems but they’re transitory. The shelves are empty but it's the supply disruption. The prices are going up, but it’s transitory, but it’s not. When inflation gets it high, it just keeps going up. I’ve been trying to think of the right word for what Biden’s doing. Bidenomics is not negative enough. He’s really doing econocide,” he told Fox News’ “The Ingraham Angle.”

“He’s got a demand stimulus that’s as big as we’ve ever seen and then he’s whacking the heck out of supply. He’s regulating firms, promising big tax hikes. We have the highest marginal tax rate in the whole developed world if they pass those tax hikes, and all that is basically creating all this cash chasing supply, but supply is going down, and so you see inflation,” Hassett said.

“People sort of say, oh it’s looking like the 1970s. I actually think it could be worse than the 1970s if you look at all these forces. These are policy errors that are unlike anything economists have ever seen, and finally, the last thought is, where are the economists? I mean, Larry Summers, you were right to cite him but the academy is just silent about this, and they need to step up, because the Biden administration right now is committing econocide,” he said.

“The bottom line is that President Trump quite prudently kept looking during the COVID pandemic with me and Larry Kudlow at the white house, what will it take to make it another couple of months? We didn't do a giant stimulus. We basically tried to fill the holes as we recognized how big they were going to be. By the end of the year we had just about levelled it off,” Hassett said.

“The GDP growth after the biggest decline since the Great Depression was about level for the year because President Trump sized it correctly. Then Joe Biden comes in and creates the biggest stimulus ever while he attacks supply, so it’s really a policy error for the ages. It's inflation right now at 6, producer inflation is at 8 is going to go up from there in all likelihood. There’s no sign at all that it's temporary or transitory,” he said.

Hassett predicted that the Biden administration will try to remove the tariffs on Chinese products.

“They just removed the steel tariffs on Europe, and I think it's just removing the tariffs on China then we’ll have gotten off easy because what’s going on is China’s going to grab whatever it wants and then promise to be nice about climate and then Biden will cave. So we just have to hope that China doesn't grab Taiwan, because if they grab Taiwan, and promise not to burn coal, I don’t even know what these guys would say to them,” he said.