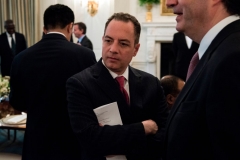 “Look, I think the word of the day on this issue is the word weakness. When you have weakness at home and you have all these things that are going wrong, whether it be inflation, COVID, gas prices, the border, Afghanistan, weakness invites aggression,” the former RNC chairman said.

“Weakness makes you vulnerable which is why we're talking this week about two things. We’re talking about Russia, Ukraine and we're talking about inflation, gas prices, and the implosion of Joe Biden, and when you become weak, your friends in places like Montana and West Virginia and Arizona and other states like that start suddenly start to look around and say you know what? I don't think I want to go down with this ship,” he said.

“That's what's going on with Joe Biden. Everything around him is imploding, and it’s all because of weakness across the board,” Priebus said.

Biden’s polls numbers are dropping, and asked what he can do to turn it around, Priebus said that what the Biden administration is doing is intentional.

“They'll have to look at what the American people are saying. The reality of all of this is not -- this is not a result of the Democrats making mistakes and kind of falling into these problems. These decisions that were made by the Democrats were intentional,” Priebus said.

“What the Democrats unfortunately believe, Dana, is that they're not selling what they’re doing properly to the American people, that the reason why these poll numbers are the way they are is that they don't do a good enough job getting out and telling people what they in fact are doing in Washington, which is why Joe Biden is in Kansas today. So they’re just walking toward this finish line, which is not going well for them,” he said.