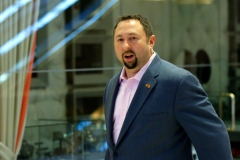 Campaign communications director Jason Miller, arrives at the Trump Tower for meetings with US President-elect Donald Trump, in New York on November 17, 2016. (Photo by EDUARDO MUNOZ ALVAREZ/AFP via Getty Images)

(CNSNews.com) – Senate Democrats have used “far worse language” than President Donald Trump and in comparison, half or two-thirds of the Senate Democratic Caucus would be impeached if you applied the same standard to them, former Trump presidential campaign senior adviser Jason Miller said Tuesday.

“What we are going to show as we dive into the second impeachment trial of President Trump today is number one, as you mentioned, this entire trial is unconstitutional. The fact of the matter is the Constitution very clearly spells out the only point of impeachment is to remove someone from office. Well, President Trump is already out of office,” he said in an interview with Fox Business’s “Mornings with Maria Bartiromo.”

“So for the Democrats to go and push this, it's pretty clear it's just a vindictive effort to try to beat him up for futures elections. I think one of the things that’s really on trial here, Maria, is the First Amendment and freedom of speech,” Miller said.

“In fact, I think you're going to see this week where a number of Democratic senators, in fact, most of them have used far worst language and much more actual inciteful rhetoric, and when you compare that, we would have to go and impeach half, maybe or two-thirds of the Senate Democratic caucus if we were go by the Democrat standard,” he said.

“The other thing I want to point out too is we look at a real true and accurate timeline of events from January 6th, you'll see these bad actors who were involved in these horrific attacks up at the Capitol were planning and plotting activities long before President Trump said anything,” Miller said.

I don't think President Trump did anything wrong on January 6th. I think he was talking peacefully, told folks to go up to the hill and cheer on their lawmakers but be patriotic, be peaceful. If you know anything about President Trump, you know, he deplores any aspect of violence,” he added.

Bartiromo pointed out that safety measures, including an 8-foot-wall, will be in place at the Capitol for the next month or so, costing taxpayers $500 million. She wondered what if any intelligence shows that this is necessary.

“Well, I would like to know it. In fact, Maria, I think you see what the Democrats have done to Washington, D.C. is they've completely destroyed this city. I mean, the city is completely shut down,” Miller said.

“Small businesses, restaurants, hotels, completely wiped out, and the other thing I would ask too, Maria, is why didn't Democrats want to take stronger action going back to last summer, going back to last fall, rejecting numerous attempts from the white house to try to help the Capitol, try to make sure that we had security in place for a number of different measures, but, again, Nancy Pelosi and Capitol Hill Democrats had rejected that,” he said.

“And so I think as we look going forward here, what we have to get back to, Maria, is what really brings the country together, and I think pushing ahead with some vindictive impeachment effort after President Trump has left office and so think about this for a moment,” Miller said.

They are trying to change the Constitution to go after one person, President Trump because if the Constitution says the only impeachment to remove him from office and they are going for it now, this is just out of spite,” he said.

As to whether Trump plans to run for political office again in 2024, Miller said, “I sure hope he does. No decision has been made here, but we will see what happens.

“I think the president’s going to be involved in making sure we win back the House and Senate in 2022, a number of these gubernatorial seats and also too we still have a lot of work to go and make sure we get our elections cleaned up, and that's going to be an effort working with the state legislators,” he said.

“We saw a number of pretty gross Article 2 abuses form the Constitution this last election and that’s something we want to go and get cleaned up but we gotta do it at the state level. We’re not going to back off of that, but no, President Trump will stay active, but I think he’s going to take a little bit -- rest and relaxation at Mar-a-Lago and we will see him right back at it shortly,” Miller added.

Bartiromo pointed out that Biden has asked for the resignations of Trump-appointed U.S. attorneys with the exception of John Durham, who will remain in place as special counsel in the Russia probe, and David Wise, who will oversee the Hunter Biden tax probe.

When asked for his take on cancelling all that was Trump, including judges, Miller said, “It appears that only with President Trump was it a big deal when you ask politically appointed attorneys to go and step down. This is really the normal practice. Usually at 12:01 p.m. on Inauguration Day you have most of the U.S. attorneys go and step down or put forward their letter of resignation, but it seems like Joe Biden is really focused on trying to destroy jobs at the beginning of this administration.

“Keystone was the big one. It looks like we are going to the U.S. attorneys next and who knows what Joe Biden will be on with this next effort,” he said.

Asked how Durham can remain special counsel if asked by Biden to step down, Miller said, “Well, I'm not sure. I think that's going to be part of the interesting thing to see how they work the gymnastics on that one, but you know Maria, the other one U.S. attorney that looks like Joe Biden’s going to leave in place is the one that's investigating Hunter Biden on his tax issues, and, again, when we talk about tax issues, that's a polite way of saying that they think he wasn't paying taxes on a lot of the foreign income he was making from China and a number of other countries.

“This is the one, Maria, that we need to pay close attention to. We go back to Tony Bobulinski. We go back to the computer store owner, and we know that this was covered up and the Democrats were out there saying this was Russian disinformation, but yet Joe Biden is leaving in place the U.S. attorney investigating this very thing they tried to brush off as so-called Russian disinformation,” he said.

“I think this is going to backfire on the Democrats. I think people are going to end up in jail on this and I think President Trump is going to be the one that looks like he was right all along,” Miller added.