Former RNC Chair Michael Steele: If GOP Gets More Power They’ll ‘White It Up as Much as Possible’ 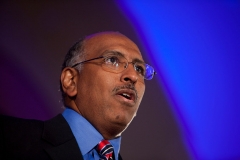 (CNSNews.com) – Former RNC Chair Michael Steele said Thursday that if Republicans gain power in Congress they’ll “white it up as much as possible,” adding that they have no governing ideas except for stopping everything that President Joe Biden tries to do.

During MSNBC’s “The ReidOut,” host Joy Reid told The Washington Post’s Eugene Robinson that Democrats are afraid that Republicans could pick up more seats in Congress through gerrymandering, and Robinson pointed out that historically, the other party gains seats in Congress in the first mid-term election after the new president is elected.

REID: It's hard for me to imagine what that even looks like, Michael, but can you discern as a Republican, what is it that they would want to do if they got power? Because all they seem to want to do right now is fall on their knees and worship Donald Trump. So let's say they get power. What is it that they want to do? What are they going to do to us?

REID: Basically hold power essentially just lock people of color out of being able to vote.

STEELE: I think you got a sense and a glimpse of it during the four years of Donald Trump of what an extended, unchecked, unfetterred power base would look like in this iteration of the party. You, the three of us, persona definitely non grata. Look, all I'd have to say is just on a quick tip on that, Tucker, if you're going to go for the queen bee, baby, you better make it count.

STEELE: No, it's an absolute power grab right now. Here's why you know that. What are the governing ideas they put out? What's your policy prescription for --

STEELE: For infrastructure, for health care, for the economy? Okay, you cut taxes, but, you know, what do you do about those people who didn't get the full benefit of that? So there are a lot of pieces here that go to governing that the party has given up on. What did Mitch McConnell just say? What did he just say? Our goal is to stop everything Donald -- I mean Joe Biden is doing. We figured that out. Can you put something on the table that you want to do?

REID: Somebody call Joe Manchin, because literally it's shots and checks on the one side and just a freak show on the other side. I don't know what else it's going to be.