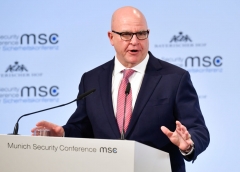 Herbert Raymond McMaster, National security advisor to the US President, delivers his speech on day two of the 54th Munich Security Conference (MSC) in Munich, southern Germany, on February 17, 2018. (Photo by THOMAS KIENZLE/AFP via Getty Images)

When asked what his biggest miscalculation or mistake was when he served during the Trump administration, McMaster said, “I think we all share a responsibility for it's not a 20-year war, it's a one-year war fought 20 times over, and what -- the basis for the problems that we've encountered in Afghanistan is certainly the enemies that we've been fighting there, as you can see today.

“And, of course, what's sad about it is this war ended in self-defeat, Chuck. I mean, we had a sustainable effort in place several years ago that, if we had sustained it, we could've prevented what's happening now, but instead what we did, Chuck, is actually, we surrendered to a jihadist organization and assumed that there would be no consequences for that, and we're seeing the consequences today,” McMaster said.

Host Chuck Todd asked whether the core mistake was taking our eye off of Afghanistan and invading Iraq and whether doing so distracted the Pentagon and our diplomats from the mission, especially considering the reasons we went into Iraq turned out not to be true.

“Hey, Chuck, there were a series of mistakes, right? The first was assuming that it might be easy, right, just to depose the Taliban and then something good happens, and so the short term approach we took to what was a long-term problem actually lengthened the war and made it more costly,” McMaster said.

“And then when we did reinforce the effort there in 2009, President Obama announced a reinforced security effort and announced the withdrawal of troops on a timeline at the same time, and then said to the Taliban, ‘We want to negotiate an agreement with you, and here's our schedule for departure,’” he said.

“How does that work in war, Chuck? War is a contest of wills, and then I think what we had during the Trump administration was, initially, the first time, we had a sound, sustainable, reasoned approach to Afghanistan in August 2017, and then the president abandoned it, and he doubled down on the same flaws of the Obama administration,” McMaster said.

“I mean, Chuck, how does it make sense to tell them we're leaving, and then say, ‘We want to negotiate a settlement’? And what that resulted in is concession after concession to the Taliban, and we got nothing for it, and as soon as you set a date, ‘We're out by May 1st’ under the Trump administration, and the numbers of troops we're going to have there, what can you do except essentially effect a surrender?” he said.

“What I would like to see is our government stop pretending, and a really good way to honor our servicemen and women who gave their lives on a modern-day frontier between barbarism and civilization is to end our self-delusion and confront the reality that this endless war, this forever war, has not ended as -- you know, because we left,” he said.