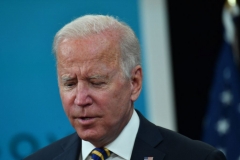 President Joe Biden gives an update on the Covid-19 response and vaccination program, in the South Court Auditorium of the White House in Washington, DC, on October 14, 2021. (Photo by NICHOLAS KAMM/AFP via Getty Images)

(CNSNews.com) - Former Energy Secretary Rick Perry said Thursday that the American people were sold a “bill of goods” when President Joe Biden was elected, because he’s never managed anything, and it shows.

Perry said that to understand what’s going on now with the Biden administration, you have to look back at the Obama administration.

“But here is the way I see the real problem in this country today, is that you have an administration that doesn't know how to govern, and I go back to the Obama administration, a person who had been in the Senate for a short period of time, never run anything, never managed anything, and I think we are seeing a replay of that with the Biden administration,” he told “Fox News Primetime.”

“They have the Washington mindset that Washington knows best. They’ve never run anything, and the American people are paying the price. He might as well -- I am talking about Ron Klain here -- he might as well have gotten up and done his best Marie Antoinette and said ‘Let them eat cake,’” he said.
“Yeah, now the cake costs $50,” host Jesse Watters said.

Perry compared the Biden administration to the Trump administration, saying that former President Donald Trump knew how to run things.

PERRY: I think we got a bill of goods laid on us is what we got, but the fact is we had four years of a president who understood how to manage things. He understood how to run a big business, to bring people in that had had the experience of running, by and large, big corporate entities, et cetera, knew how to manage -- and I think that’s the real difference here. I mean, Joe Biden has been in the Senate. He's never managed anything. He can't even manage his family.

PERRY: You've got to admit though, Jesse, Hunter Biden is an artist.

WATERS: Right. The only thing, I guess -- his paintings are inflated, too. What are they selling for, 75 Gs?

WATERS: Hunter knows all about high-class problems, doesn't he, governor?