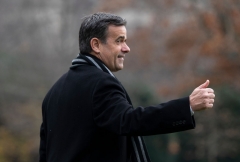 Former Director of National Intelligence, John Ratcliffe, walks to Marine One on the South Lawn of the White House in Washington, DC on December 12, 2020. (Photo by ANDREW CABALLERO-REYNOLDS/AFP via Getty Images)

Ratcliffe said it’s “infuriating” and “nonsensical” that Biden is ignoring the severity of the border crisis and instead took shots at Texas Gov. Greg Abbott and Florida Gov. Ron DeSantis for refusing to mandate masks for students in school.

“Well, it's infuriating. It's nonsensical, but the bottom line is, it's just total garbage. I mean, I came on your program in January and talked about the fact that, if Joe Biden reversed the policies at our border, he would create a humanitarian crisis that didn't exist. That's exactly what happened,” he said.

“And you and I -- and you have documented that well on this program, Maria, but what neither one of us saw was that he would take a humanitarian crisis and now create a health -- public health crisis at our border as well. By his actions, he's created the largest COVID super-spreader event anywhere on the planet at the Southern border in Texas right now, and to criticize Texas over COVID is just -- is just nonsensical,” Ratcliffe said.

“I mean, let me put this in perspective for you, Maria. As you and I, as U.S. citizens, if we go to Mexico City, and we want to return to our home country, we can't do so. The Biden administration says we can't do so without a COVID-negative test,” he pointed out.

“And yet Joe Biden made believe he didn't know who Ron DeSantis is last week. Ron DeSantis pushed back, saying, what else doesn't he remember? There's that other elephant in the room, in terms of cognitive difficulties from the leader of the free world. What does that tell our adversaries across the world?” host Maria Bartiromo asked.

“Well, I mean, I hate to criticize Joe Biden. It almost seems like elder abuse to talk about those things, but the bottom line is, whether or not he's making decisions or not, he's accountable for the decisions of his administration, and both domestically and from a foreign policy standpoint, they have been a disaster, and the American people, I'm confident, will hold him accountable at the upcoming elections, both at the midterm and in 2024, and, frankly, I think that will be important to do to save America,” Ratcliffe said.