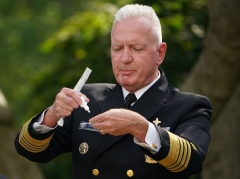 Admiral Brett Giroir, MD, Assistant Secretary For Health, United States Department of Health and Human Services demonstrates using a self test kit as he speaks on Covid-19 testing in the Rose Garden of the White House in Washington, DC on September 28, 2020. (Photo by MANDEL NGAN/AFP via Getty Images)

“It's very contagious. We underestimate the counts in this country by about a third, so there's probably about a million and a half cases per day right now, and it's very, very contagious. The good thing, both because Omicron is less pathogenic, so it’s less serious, and there’s enough population immunity, is that we have dissociated the cases from hospitalization and death,” he told Fox News’ “The Faulkner Focus.”

“So that's a very important part. I want to urge all your listeners please to get vaccinated, and even if you had COVID before, Omicron does circumvent even natural immunity, so go get your booster. That's the best way to protect us. Everything else is on top of that. Masks can help in indoor crowded spaces. Monoclonal antibodies, there are certain ones that still work, and those oral drugs are very important. That's how we defeat this,” Giroir said.

He said that “it’s very significant” that we have testing shortages right now.

“You are seeing the consequences of that right now, question marks about isolation, about quarantine, about getting back to school. The fundamental issue was, is that the Biden administration did not place orders and secure the industry between about January and September, so you saw lines closing down,” Giroir said.

“You saw workers getting laid off. You saw tests getting destroyed. Now they’re playing catch-up, and we are just in a bad spot now, because we don't have enough antigen tests to provide it widely. We’re going to have to be very strategic, and they're not doing that right now,” he said.

As for what that strategy should look like, Giroir said, “So, the Biden administration put out a request for proposals on December 30th, and their parameters were getting about 250 million tests within the next 5-6 weeks and then another 60 days for the rest of the 250 million. So that's 500 million over three months. You can’t just send it out ad hoc. We need to use those tests.

“Number one, we could use those tests to get people out of isolation if they are positive. If you're positive, request a test so you can do it. Number two, we need to make sure that all the people who can benefit from the Merck and Pfizer oral pills that are very very important, you need to test positive, and you need to test positive early,” he said.

“We need to get it to those people early. We know they are. We have Medicare rolls. We have insurance rolls. That’s what I mean about strategically, to use them to keep people out of the hospital, to keep them from dying, not just to give them out first-come first-served,” Giroir added.

As CNSNews.com reported, former FDA Commissioner Dr. Scott Gottlieb said that cloth masks don’t offer a lot of protection against the Omicron variant. It protects against droplet transmission but not from airborne transmission, he said.

Giroir agreed, saying that “the evidence is mounting that Omicron is highly infectious and the typical single-cloth masks do not help.”

“A surgical mask is better, or a type of N95 mask is obviously the best. You have to weigh your own risk and benefit for that, but I think the era of cloth masks with Omicron is probably over. They don't really provide almost any protection, according to the newest data,” he said.